A friend asked me: "How do you describe yourself...?" 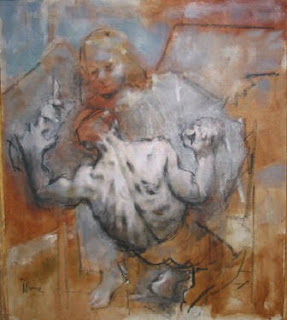 Ed. note:  A friend emailed me a couple of questions I didn't know how to answer at first. I began to write, and a few thoughts - though more than he expected, and I intended - flowed out.  I thought maybe I'd record my response here on the blog - after all, it is a journal, and I suppose others might be interested as well.

I don't.  I'm not sure what else to say.  When and if sexual temptation comes along, I just see it as that - temptation to sin.

I'm accustomed to the so-called gay identity because that is where 'I came from' if you will, it was the niche I fit into, and it is how the world views persons with same sex attraction or those who engage in homosexual activity.  Precise language should not include that way of identifying self or one another however, despite the fact it is how contemporary secular culture, as well as gay culture, insists upon labeling persons.  I suppose the alternative could be 'ex-gay' - but once again, that plays into the gay identity trap, and it isn't accurate.  Of course, when I am with friends or associates who are non-religious and gay - it's just a given I suppose.  Although it is not even discussed.  If I were to make a show of 'I don't identify as gay' they would think I was nuts - they wouldn't be able to comprehend that. My friends already think I'm nuts because they know what I believe about homosexuality and that I'm a practicing Catholic, but it is what it is - the carnal man can't comprehend the spiritual.

On the other hand, with anyone else - family, former co-workers, and so on, I never identify as anything but a Catholic man.  If challenged, I explain what I believe as regards chastity and celibacy - which accords with Catholic teaching on sexuality.  People seem to think what they want to think anyway - but I have no control over that.

More deeply, my self image remains somewhat disfigured however - or more accurately, wounded - which is another reason why I find such consolation in devotion to the Holy Face.  I tend to identify with Jacob in today's reading; though I've wrestled all of my life with this issue, my heart is fixed on God - his loving will for me.  The inclination itself has greatly subsided.  If it troubles me at all, it manifests as a temptation at times, or perhaps in a dream, but the effect is more like a wound, a jab, or a thorn in my side to remind me that it was grace alone which pulled me from the mire.  Again, taking the imagery from the story of Jacob, whose hip socket was wrenched in the struggle, I too go through life with a sort of limp:  Again, I see it as a lesson in humility as well as a call to deeper repentance, and as a reminder to have compassion for others.  In a sense, the grace I've been given is similar to Jacob's, who was given a new name in and through the struggle.  Similarly, my true identity in Christ is thereby continually revealed.  In Christ there is no gay.

In response to your own struggles, I want to say, the temptations, the falling and rising younger men experience, do not define them - albeit the nature of the temptation is the defining factor of their combat; yet when we accept Christ, it is His victory which leads us through every defeat, and wins every battle.

I also think that eventually you find you can appreciate others without worrying about what attracts you to them, without trying to 'justify' your feelings, or better put, to examine them so minutely as to determine whether or not you consented to 'movements' to lust.  We get all mixed up because we feel unwanted physical movements, and unwanted passionate emotions - they are just feelings.  We often conflate the tempest with feelings of fear, guilt and despair.  Of course you do well to examine your conscience, and/or try to understand what's going on in those experiences, but you should find your peace.

Remember,  'Christ walked in peace through the midst of them' - that is how Christ acted amidst all the turmoil raised by the villagers who sought to throw him over the hill - that's sort of an analogy of the effect temptations have on us, and how we can conduct ourselves in the heat of the moment, as it were.  Naturally, things are entirely different when we deliberately place ourselves in the occasion of sin - in that case we need to flee, like the naked guy in the garden after the arrest of Jesus - run, even though we lost even the little we imagined was covering us.


We keep fighting, continuing to trust in Jesus.

From the days of John the Baptist until now the kingdom of heaven suffers violence, and the violent take it by force. - Matthew 11:12

Email ThisBlogThis!Share to TwitterShare to FacebookShare to Pinterest
Labels: How you suffered for your sanity, Personal