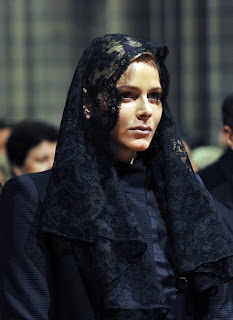 Charlene Wittstock, Princess of Monaco*
Looking good in a mantilla.

Third Sunday in a row - the woman in the mantilla.

Recently our parish merged with another parish - and since the 'unification' Mass I've noticed several strangers at Mass.  One, an older woman, wears a mantilla, although she stands to greet those around her before Mass begins, applauds on key, and extends her hand for the sign of peace.  It's all good though.  It doesn't matter - I mean, look how beautiful the princess of Monaco looks in a mantilla - nothing wrong with wearing one if a woman feels so inclined.  I'm only mentioning the head covering because Fr. Z just did a post on women and mantillas - again.  Lots of mileage on that subject.

I noticed one commenter, obviously interested in starting another thread, mentioned women in pants - like it's a bad thing.  This stuff never gets old for some people, does it.

Anyway - Speaking of trousers on women, I came across a really cool Armani ad: stunning model, dressed in one of his suits for women.  I like the look.  Which is why I scanned and posted the ad for Mass Chat.  Something different to discuss at Donutz and coffee for a change. 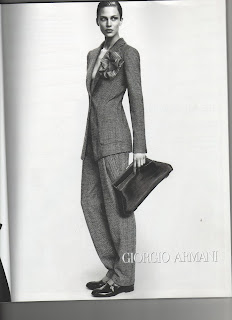 
"Feminism can only occur in societies where men allow it." - Author unknown.

*Remember the Taki Magazine story claiming the Princess was drugged and forced to marry Prince Albert?  Apparently she's still there, married to the wicked Prince - and she loves mantillas.
Posted by Terry Nelson at 12:01 AM