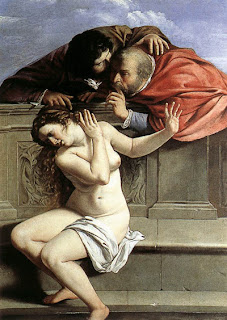 The tradition of blaming the victim.
.
The old men were highly regarded Jewish elders, judges in Babylon, who lusted after Susanna, the wife of Joakim.  They attempted to seduce her, and when she refused, they made a case against her, accusing her of having an affair with a younger man.  The young prophet Daniel defended Susanna, revealing the lies the men had forged against her because she refused their advances.
.
Likewise, in the Gospel, the scribes and Pharisees brought before Jesus the woman caught in adultery, calling for her to be stoned to death, in accord with the Law.
.
Such injustice is perpetrated against women even in our own day.  The public is now very much aware that women caught in adultery can be stoned to death, and in cases of rape, severely punished in Islamic countries.  In Pakistan and India women who have been raped can be flogged or can face a worse punishment, such as honor killing.  Likewise in the West, it is not uncommon to hear claims that women ask to be raped because of how they dress, or how they behave.  Frequently women who report sexual assault, harassment, or abuse are accused of lying with the hope of enriching themselves, either through a lawsuit or a legal settlement.
.
Art: Susanna - Artemisia Gentileschi
Posted by Terry Nelson at 12:01 AM