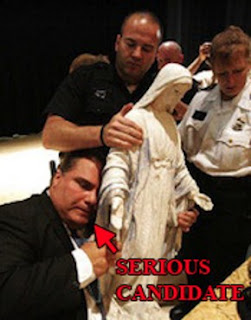 City Government stories.
.
I'm hoping the writers for NBC's Park's and Recreation are watching the news lately - they can gather a lot of material from real city governments for upcoming episodes.
.
Locally a New Prague, MN council member, Ken Betterton resigned after making drunken threats to police who arrested him for disorderly conduct in a local restaurant.  Drunk as a skunk, all he wanted to do is drive home.  Police were called, found him on his knees in the grass.  He became combative, threatened the officer's job and further funding from the city for the police department, saying, "I've just become your worst nightmare."  LOL!  Politicians and their power-trips.  Kenny resigned the next day.
.
Then there is the story of the highly paid mayor, police chief, and city council members of Bell, California who appear to have lived like Spanish Colonial Viceroyalty ruling over the mostly Hispanic town.  The story may not be so unusual some place in Guatemala, but this one takes place in the U.S..
.
The funniest city politics story emerges from Providence, Rhode Island, where a Democratic mayoral candidate shows up to the mayoral debate carrying a very large statue of the Blessed Virgin.  Candidates were told not to bring props or signs to the debate stage. Young argued it was a question of free speech: "The statue stands for my faith. I believe I have a right to be here with my faith."
.
I know!
.
Photo credit:  Pewsitters  The Providence mayoral candidate.
Posted by Terry Nelson at 8:56 AM

Email ThisBlogThis!Share to TwitterShare to FacebookShare to Pinterest
Labels: Nuts on your cereal?