It Seems The Bishops Are Still Concerned About The Blogs 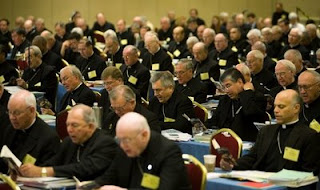 "We are particularly concerned about blogs that engage in attacks and hurtful judgmental language. We are very troubled by blogs and other elements of media that assume the role of magisterium and judge others in the church." - Bishop Zavala, CNS Story
.
Really?
.
For some reason this makes me think of that story of Rembert Weakland when he tried to get Mother Angelica knocked off the airways...
.


Taking note of Weakland's efforts, Mother said, "I just want him [Weakland] to know that if he gets us off the cable in Milwaukee, we will teach the truth on the shortwaves right past him. He can't stop the shortwaves. We'll be selling shortwave radios all over Milwaukee." When I suggested that that parallels American efforts to beam news into Soviet-occupied territories during the Cold War, Mother nodded approvingly. "It's the exact same thing. They used the same methods of intimidation." - Fighting The Good Fight of Faith