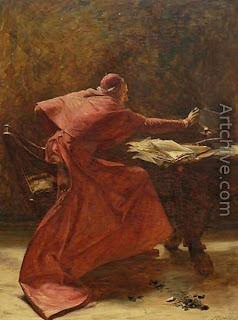 So anyway, not that it matters...
.
I really hate writing about how homosexual men should not be ordained - but it is the 'rule' and I for one see the wisdom in it, even though my contemporaries do not.  Yet as I always say, men with this tendency have always been ordained, and always will be - it is a mystery of divine grace I suppose, because frankly, if it hadn't been for some priest/confessors who just happened to be 'same-sex attracted' - albeit completely faithful to Church teaching - I may never have made it this far.  Therefore, it needs to be acknowledged that there are very good faithful men who know what it is to struggle and suffer and remain faithful amidst enormous temptation, suspicion and contempt.  Some may even be bishops, and some - by now - may even be Vatican prelates.  Yet they stand by Church teaching and support it.  In the meantime, if Christ calls a man to the priesthood... who am I to say anything?  All things are possible with God.
.
Nevertheless, I believe the following from Chilean Cardinal Jorge Medina Estévez is the truth:


Reacting to Argentina’s decision to legalize same-sex marriage, the cardinal said that “the Church distinguishes the homosexual tendency and homosexual practice. If a person has a homosexual tendency it is a defect, as if one lacked an eye, a hand, a foot.” On the other hand, homosexual activity, he noted, is immoral.

“In my life as a priest, I have had [pastoral] care of many people with this problem,” he added. Some, like alcoholics, have overcome this tendency by “discipline, education, or reeducation,” he said, while others have heroically resisted this tendency for their entire lives.
.
In a 2002 letter, Cardinal Medina Estévez, in his capacity as a Vatican prefect, had reiterated the Church’s discipline against ordaining men with homosexual inclinations.
.
“Ordination to the diaconate and the priesthood of homosexual men or men with homosexual tendencies is absolutely inadvisable and imprudent and, from the pastoral point of view, very risky,” he wrote. “A homosexual person, or one with a homosexual tendency is not, therefore, fit to receive the sacrament of Holy Orders.”  - Source

.
The dogs bark but the caravan moves on...
.
Such a clear statement by the Cardinal prefect seems contradictory to reality, huh? But there is no accounting for God's grace. (And clearly, my opinion on the subject doesn't matter.) That said, I wholeheartedly accept the teaching of the Church on faith and morals. Sadly, many people will continue to ask for clearer statements until they hear what they want to hear - that will never happen however.

Email ThisBlogThis!Share to TwitterShare to FacebookShare to Pinterest
Labels: thanks for stopping by