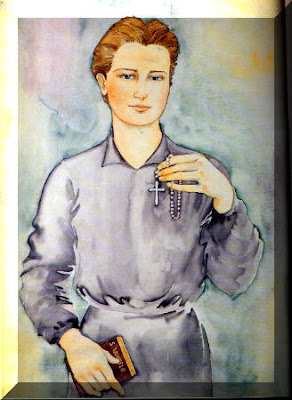 Blessed are the pure of heart.
.

Tomorrow is the memorial of St. Maria Goretti, the young girl murdered for refusing the advances of a teenage man, Alessandro Serenelli, who lived and labored along side the Goretti family. Maria's story is quite well known.
.
Since I'm sure everyone knows Maria, I would like to call your attention to another young woman, closer to our time, who happened to be at Maria's canonization, and who suffered a similar fate in 1957. Pierina Morosini. Pierina was 26 when she was murdered while returning home from her job in a factory. Her attacker attempted to seduce her, and as she refused his advances and tried to fight him off, he beat her to death with a large stone, crushing her face.  Blessed Pierina is today venerated as the patron of rape victims, as well as a martyr for chastity.
.
Born into a poor family of eight children in 1931 in the Diocese of Bergamo, Italy, Pierina at one time desired to enter religious life but remained a lay woman consecrated to God by a private vow of chastity. She remained with her family offering support to her mother, while teaching catechism in her parish. Trained as a seamstress, Pierina began to work in a factory at age 15. On October 4, 1987, John Paul II beatified Pierina along with another Italian martyr for purity, Antonia Mesina , the 16 year old Sardinian murdered by a teenage rapist in 1935.
.

The dignity and the vocation of women - as well as those of men - find their eternal source in the heart of God. And in the temporal conditions of human existence, they are closely connected with the "unity of the two". Consequently each man must look within himself to see whether she who was entrusted to him as a sister in humanity, as a spouse, has not become in his heart an object of adultery; to see whether she who, in different ways, is the co-subject of his existence in the world, has not become for him an "object": an object of pleasure, of exploitation. - THE DIGNITY AND THE VOCATION OF WOMEN, John Paul II