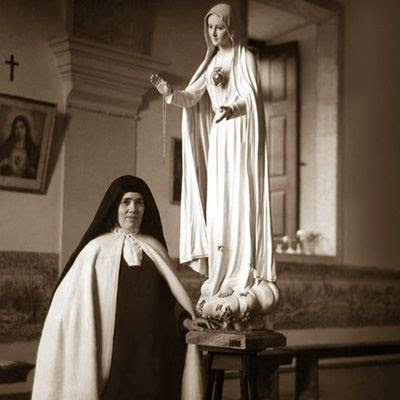 I hate it when academia takes over and dissects and reconstructs a correct exegesis on events such as Fatima - not that it's a bad thing - but distinguishing between low and high theological interpretations somehow diminishes the simple urgency of the fundamental message.  I may be wrong about that, but it seems to me to distract and even detract from original spirit.  Of course, Our Lady intended that the Church interpret the events and secret of Fatima, as she indicated to Sr. Lucia as she wrote the secret,  Our Lady told her not to offer her own interpretation as she understood it, but instructed her to simply write what happened.  "Be at peace and write what they order you, but do not give your opinion of its meaning."  Therefore any exegesis on the texts is to be expected - but in our day it can add to the confusion.

I'm reacting here to a post by Fatima exegete Kevin Symonds, concerning his response to author Michael Lewis of Where Peter Is, who wrote: “While the term [apostasy] appears often in the claims and writings of the Fatima conspiracy theorists, the word appears neither in the Church-approved messages of Fatima or in any of the subsequent elocutions or statements by Sr. Lucia….”

Mr. Symonds takes issue with that, writing: "An examination from the “high” Fátima theology perspective demonstrates that one can discern a warning against the danger of apostasy within Our Lady’s message even if the actual word is not used. Lewis’ desire to clarify some misconceptions about Fátima is noble and he makes some other Fátima-related observations in his article that are noteworthy. His one argument on apostasy, however, emanates from the perspective of a “low” Fátima theology, which provided a short-sighted vision of the message of Fátima unequal to the argument being made. As one sympathetic to Lewis’ desire to dispel myths and falsehoods among us, I respectfully and charitably encourage him to exercise caution before taking such a heavy-handed public stand on Fátima and its relation to apostasy."

"The task of giving an authentic interpretation of the Word of God, whether in its written form or in the form of Tradition, has been entrusted to the living teaching office of the Church alone. Its authority in this matter is exercised in the name of Jesus Christ."47 This means that the task of interpretation has been entrusted to the bishops in communion with the successor of Peter, the Bishop of Rome." - CCC

Urban legends and conspiracy theories have corrupted the Fatima message.

To be sure, Mr. Symonds analysis is well done and fairly balanced. I never read the Where Peter Is article until today, though I was aware of it, but I don't see Lewis being any more heavy handed than some of the papal critics and dubious Fatima exegetes he takes aim at. Quite frankly, I'm just not sure the prophecy of a genuine, outright apostasy can be discerned in the Fatima message - be it 'low or high Fatima theology'.  I think it rather to be the responsibility of the Holy Father and the CDF to make that determination and to guide the faithful accordingly. Blog posts and social media commentary not withstanding. Apostasy was never discussed in the Holy See commentary after the Third Secret was revealed under Cardinal Ratzinger.  If any one would have, could have, should have warned the faithful of apostasy it would have been Ratzinger.

It's an unfortunate distinction to make regarding low and high Fatima theology, another bit of academic snobbery and exclusion, I would say.  One must remember, the Blessed Virgin revealed herself to small, uneducated children, and as Sr. Lucia always insisted, "The part necessary for the people to know was already known since 1917."

Anyway - if you are truly concerned about Fatima and its continued relevance in our day, follow Our Lady's requests, stop offending God, do penance, pray the rosary, and practice the First Saturday devotion.  Little children understood that in 1917, and those like them understand it in 2018.
Posted by Terry Nelson at 12:01 PM