I've had it with Pope Francis. 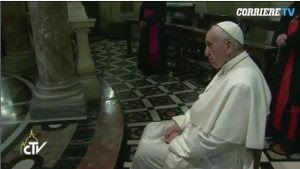 Pope Francis sat in the crypt of Milan Cathedral
before the Most Blessed Sacrament:
"He did not kneel, sat,
not once did he remove his pileolous
and assume an attitude of prayer"
Yeah - who's the lazy one now?!

He turns on you.

Today's homily is nothing but another insult - a direct attack on me - when he talks about the slothful complainer:

The Gospel story at the heart of Pope Francis’ reflection tells of a man who had been ill for thirty-eight years. He was lying at the side of a pool called Bethesda with a large number of ill, blind, lame and crippled who believed that when an angel came down and stirred up the waters the first to bathe in the pool would be healed. When Jesus saw him lying there and knew that he had been ill for a long time, he said to him: “Do you want to be well?”

When Jesus, the Pope pointed out, asked that strange man if he wanted to be well, instead of saying “yes” he complained there was on one to put him in the pool while the water is stirred up and that someone else always got there before him. His answer, Francis said, was a complaint, he was implying that life had been unjust with him. “This man, the Pope noted, was like the tree planted along the bank of the rivers, mentioned in the first Reading, but it had arid roots, roots that did not reach the water, could not take nourishment from the water”.

The Pope said this is clear from his attitude of always complaining and trying to blame the other.

“This is an ugly sin: the sin of sloth” he said.  Pope Francis said this man’s disease was not so much his paralysis but sloth, which is worse than having a lukewarm heart. - Source*


Pick, pick, pick.  Always pointing out sin.  Why can't he ever say anything nice about the lazy complainers on the peripheries? 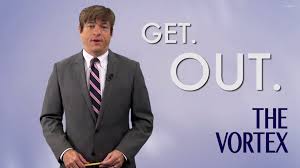 Email ThisBlogThis!Share to TwitterShare to FacebookShare to Pinterest
Labels: I love Pope Francis, I'm really a lazy lout-good for nothing, Just kidding, parody-satire-humour