The Flying House and why Our Lady of Loreto is the Patroness of Aviation - Oh, and a couple of thoughts on Vatican II. 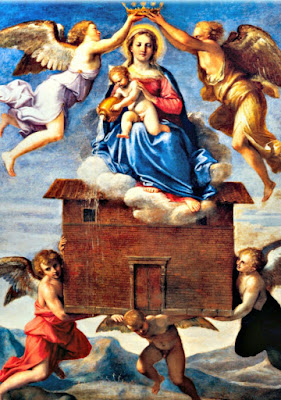 The happiest days of my life were spent at Loreto, inside the Holy House.


Mary's home in Nazareth was viewed as a holy place and the Apostles used the residence as a church.

After the fall of the Latin Church in Jerusalem in 1291, tradition tells us that a band of angels scooped up the little house from the Holy Land, and transported it first to what is now Croatia. They later carried the home to Italy, where it finally landed in Loreto on December 2, 1295. It was this flight that led to her patronage of people involved in aviation, and the long life of the house that has led to the patronage of builders and construction workers. - Read more here.

I stood for hours praying ... I'll never forget it.  If only I could recover my early love.  O Mary, conceived without sin, pray for us who have recourse to thee. 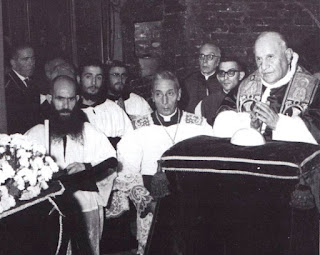 St. John in the Holy House.


Pope St. John XXIII made a pilgrimage to the Holy House to pray the day before the opening of Vatican Council II, to ask the Blessed Virgin's protection of the Council.  Pope Benedict made the same pilgrimage 50 years later.

From the start, the Council was entrusted to the Blessed Virgin - therefore it is absurd to call Vatican II a 'bad Council' - especially by devotees of Our Lady and followers of dubious apparitions, mystics and locutionists who condemn the Council and predict schism.  Where is the faith?

As Our Lord said:


I say to you, if you have faith the size of a mustard seed, you will say to this mountain, ‘Move from here to there,’ and it will move. - Matt. 17

I think this is, in part, the meaning of the Translation of the Holy House - a call to faith, an afirmation of the power of faith.  The miraculous is meant to bolster faith ... I think it is why St. John XXIII could confidently wave off the prophets of doom, saying:

We feel that We must disagree with these prophets of doom, who are always forecasting worse disasters, as though the end of the world were at hand.

In the daily exercise of Our pastoral office, it sometimes happens that We hear certain opinions which disturb Us—opinions expressed by people who, though fired with a commendable zeal for religion, are lacking in sufficient prudence and judgment in their evaluation of events. They can see nothing but calamity and disaster in the present state of the world. They say over and over that this modern age of ours, in comparison with past ages, is definitely deteriorating. One would think from their attitude that history, that great teacher of life, had taught them nothing. They seem to imagine that in the days of the earlier councils everything was as it should be so far as doctrine and morality and the Church's rightful liberty were concerned. - P.John XXIII, Opening Address

I wonder how many people have even read the Opening Address, or the Documents of Vatican II? 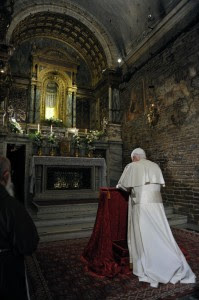 Pope Benedict praying in the Holy House
50 years to the day St. John prayed there.

Email ThisBlogThis!Share to TwitterShare to FacebookShare to Pinterest
Labels: In thanksgiving for the Protection of the Mother of God and favors granted