St. Teresa of Calcutta and Hillary Clinton ... a special friendship. 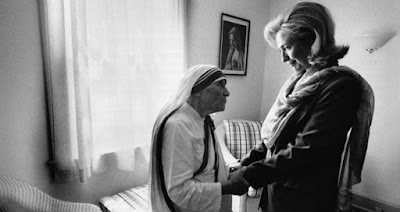 Many Catholics condemn Hillary Clinton for any number of reasons, but chiefly because of her pro-abortion politics and reputation of lying. We have a tendency to demonize people.  Even today, on day of Mother Teresa’s canonization, a well known priest online referred to Hillary and her husband as the “odious Clintons” - Mother Teresa never, ever did that kind of thing.  She never, ever described the President and First Lady as "odious".

Here is an excerpt from an article which recalled Mother’s address in 1994 at The National Prayer Breakfast where President Clinton and First Lady Mrs. Clinton were present.

“Mrs. Clinton noted the pointed nature of the nun’s words. “Mother Teresa was unerringly direct,” the First Lady recounted. “She disagreed with my views on a woman’s right to choose and told me so.” Tell her so she did; but though she was direct in her disagreement, she also offered something that Mrs. Clinton could applaud. Although Hillary Clinton was, and remains, a supporter of legalized abortion, she agreed with Mother Teresa that adoption was a preferable alternative. Speaking to her afterwards, Mother Teresa told Mrs. Clinton of her desire to continue her mission to find homes and families for orphaned, abandoned, and unwanted children by founding an adoption center in Washington, DC. She invited the First Lady to assist her in this endeavor, and brought Mrs. Clinton to India with her to witness her work firsthand.

Mother Teresa’s motions were not wasted. When Hillary Clinton returned to Washington, she took up Mother Teresa’s request with a will. Keeping in contact with the saint who called her regularly to receive updates on her “center for babies,” Hillary Clinton did the necessary legwork and succeeded in opening The Mother Teresa Home for Infant Children in 1995 in an affluent section of Washington, DC. Mother Teresa joined her for the opening, and two years later passed into the arms of her Lord. But she left a bright mark on the career of Hillary Clinton, who saw something remarkable in the tiny nun, and chose to do her bidding to help save lives. Mother Teresa inspired Mrs. Clinton to do a truly good work in spite of her dedicated promotion of Planned Parenthood’s agenda for “safe and legal” abortions.

The center was quietly and unfortunately closed in 2002.” -  Sean Fitzpatrick for Crisis


As Catholics we need to stop condemning others.  I know I have to.  Pope Francis demonstrates for us how to do this.  Just as St. Teresa of Calcutta and her Missionaries of Charity have done and continue to do.  They are the real deal.

Imagine - Our Lord himself requested, instructed Mother Teresa to found a new religious order which would go out into the streets, to the peripheries, long before Pope Francis came along teaching the same message of mercy.

Holy Mother, St. Teresa of Calcutta, Star of this Pontificate, guide us upon the way, be our light in this dark night of the Church.  Help us to fix our eyes upon Jesus and him crucified.
Posted by Terry Nelson at 11:15 AM

Email ThisBlogThis!Share to TwitterShare to FacebookShare to Pinterest
Labels: In thanksgiving for the canonization of Mother Teresa