Princes shall come out of Egypt; Ethiopia shall stretch out her hands unto God. - Psalm 68 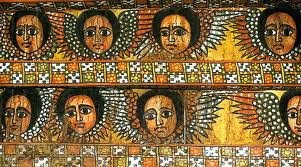 Princes shall come from Ethiopia...

I live across the street from an old Lutheran church given over to the Seventh Day Adventists.  Apparently now the Adventists rent out the church on Sundays to a group of Ethiopian Orthodox Tewahedo Catholics.  Their strain of Orthodoxy is pre-colonial.  The uniate Orthodox developed during the colonial period in Africa.  The Church traces its origins back to the origins of the Faith:


Then the angel of the Lord said to Philip, Start out and go south to the road that leads down from Jerusalem to Gaza. So he set out and was on his way when he caught sight of an Ethiopian. This man was a eunuch, a high official of the Kandake (Candace) Queen of Ethiopia in charge of all her treasure. (Acts, 8:26-27) 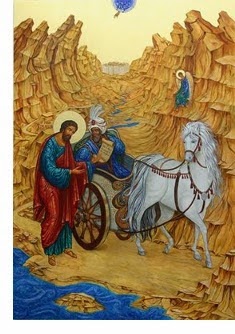 This morning I met with one of the members before he entered the church to confirm they were truly Ethiopian Orthodox.  They are.  I was so happy.  Years ago I buried a scapular and some medals on the church property, praying Our Lady the church would become Catholic.  This is the next best thing.  To learn more about their beautiful tradition go here.

They are so amazing, the men and women wear white* over their clothes - the women are veiled and wear long dresses.  They do prostrations before entering the church, making the sign of the cross three times - they also remove their shoes.  I believe they use drums and chant outside the Iconostasis or sanctuary - those who do not take communion at least.

I think I know why many Orthodox do not want to be united with Rome - they want to preserve their traditions.  When I told the man I spoke with that I was Roman Catholic he said something I didn't understand and just smiled.  I don't think he was as impressed as I was.

I told them I pray with them and that I am so grateful they are here. 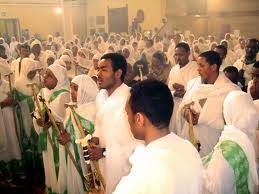 It is tradition to wear white or traditional Ethiopian clothes,
(symbolizing the purity of Our Lord Christ), it is not mandatory.
However, if you intend to take communion, then you must wear white.
Source