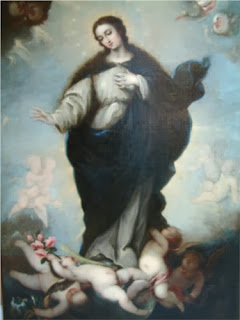 O PURE and immaculate and likewise blessed Virgin, who art the sinless Mother of thy Son, the mighty Lord of the universe, thou who art inviolate and altogether holy, the hope of the hopeless and sinful, we sing thy praises. We bless thee, as full of every grace, thou who didst bear the God-Man: we bow low before thee; we invoke thee and implore thine aid. Rescue us, O holy and inviolate Virgin, from every necessity that presses upon us and from all the temptations of the devil.
Be our intercessor and advocate at the hour of death and judgment; deliver us from the fire that is not extinguished and from the outer darkness; make us worthy of the glory of thy Son, O dearest and most clement Virgin Mother. Thou indeed art our only hope most sure and sacred in God's sight, to Whom be honor and glory and majesty and dominion for ever and ever world without end. Amen. - St. Ephraim the Syrian 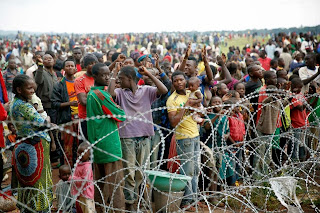 Urgent prayer need for the Christians of Central African Republic
﻿

BANGUI, Central African Republic (AP) — Thousands of Christian civilians sought refuge at an airport guarded by French soldiers Friday, fleeing from the mostly Muslim ex-rebels with machetes and guns who rule the country a day after the worst violence to hit the chaotic capital in nine months.

Outside the barbed wire fences of the airport, bodies lay decomposing along the roads in a capital too dangerous for many to collect the corpses. Thursday's clashes left at least 280 dead, according to national radio, and have raised fears that waves of retaliatory attacks could soon follow.

"They are slaughtering us like chickens," said Appolinaire Donoboy, a Christian whose family remained in hiding.

France had pledged to increase its presence in its former colony well before Christian militias attacked the capital at dawn Thursday. The arrival of additional French troops and equipment came as the capital teetered on the brink of total anarchy and represented the greatest hope for many Central Africans. - Source


Most holy Virgin, who wast pleasing to the Lord and became His Mother, immaculate in body and spirit, in faith and in love, look kindly on those suffering from persecution and violence as we implore thy powerful patronage. The wicked serpent, against whom was hurled the first curse, continues fiercely to attack and ensnare the unhappy children of Eve. Do thou, then, O Blessed Mother, our queen and advocate, who from the first instant of thy conception didst crush the head of the enemy, receive the prayers which, united with thee in our single heart, we implore thee to present at the throne of God, that we may never fall into the snares which are laid out for us, and may all arrive at the port of salvation; and, in so many dangers, may the Church and Christian society sing once again the hymn of deliverance and of victory and of peace. Amen.