There's a new statue for the Shrine of Our Lady of Good Help in Wisconsin. 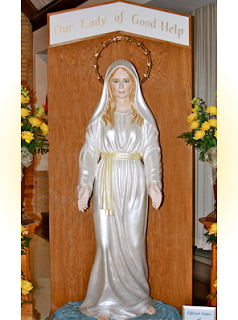 New Madonna
I don't know what to say.

Badger Catholic posted on it, but I'm not sure if he is serious.  I suppose I could have followed the links to find out for sure, but I'm going to take him at his word and believe what he wrote in the post.  Go here for Badger's post and more photos. (His site is a 'nuclear-free zone' as well!)

Bishop Ricken gave 'canonical recognition' to the shrine not long ago.  In the 1800's Our Lady appeared near Green Bay and asked a young woman, Adele, to teach catechism to the local children; she did, and became a nun as well.  Then fire broke out and burned the entire area except for the area Our Lady appeared, and miracles happened ever since.  Bishop Ricken approved the apparitions and established the chapel as an official shrine.  (I wrote this from memory and without taking a breath!  I know!  Like I'm talking real fast to get the history out of the way so I can rip on the new statue.) 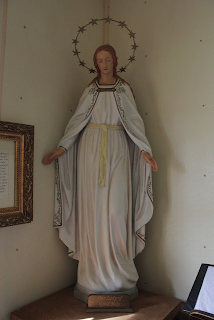 So the statue is really - not a masterpiece.  That's all I really wanted to say.  It strikes me as too sensuous and reminds me of  some of the resin Chinese statues you'd find in a Catholic bookstore.  My first thought was 'kitsch'.  The figure seems to portray a sort of popular culture idea of beauty.    Which was why I thought Badger wasn't serious with his post - I thought he was pulling a fast one.  No Bishop would ever commission or accept a statue that looked like that.

Another image of Our Lady I have difficulty with is OL of America.  Two thoughts:  Maybe some images are too literal?  Maybe religious statuary companies need better artisans?

I'm not that familiar with the messages of Our Lady of America, perhaps the Blessed Virgin asked for a statue to be made exactly as she is depicted - although I wonder if a fine artist might have executed it more delicately, more subtlety?  There's a lot going on with the image - although it strikes me as  more suited to public veneration than the new Good Hope statue.

On the other hand, if the new statue for OL of Good Hope was done according to Sr. Adele's description, perhaps the craftsman who did the new image would have done better to rely more upon the archetype already at the shrine.  Sacred images made for devotion ought to move one to devotion, not excite the senses, or the emotions in the sense pop-culture does.

I believe the artisans were sincere and no doubt they are talented. God reward them.  Our lady must be pleased with their efforts. 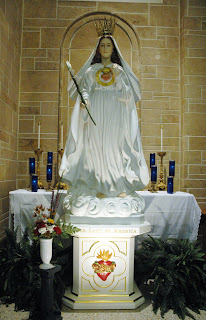 Email ThisBlogThis!Share to TwitterShare to FacebookShare to Pinterest
Labels: what? Catholic kitsch and trends