Will Fr. Cutie be as big a success now that he is married? 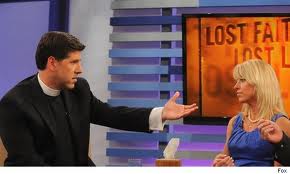 Fr. Cutie is back on television.
.
He's still an active priest, so I call him Father - but now he's an Episcopal priest of course.  Most likely very few people outside the Catholic Church think there is much difference between Catholic and Episcopal.  Non-religious people could care less, I'm sure.  What does it say to me that he's back in business?  That celebrity priests like the limelight, the fame and adulation, as well as the money.
.
Anyway.  My friend Paula sent me a couple questions regarding Cutie's Eucharist - what happens at his Episcopalian Masses/Communion Services?
.
1.  Here is my question:  Since by ordination Fr. Cutie is a priest forever, whenever he celebrates Mass in the Episcopal Church does the host and the wine become the Body and Blood of Christ?
.
2.  And if transubstantiation takes place, does that mean the communicants receive the Eucharist sacrilegiously?
.
One more question I thought of:  Could a Roman Catholic attend Fr. Cutie's Mass and fulfill his Sunday obligation, as well as receive Communion?  Many people seem to think they can do so in good conscience at SSPX chapels - so what about at Fr. Cutie's?
.
These are obviously questions for a priest to answer:  And Fr. Richard does so in the combox.  Thank you Fr. Richard.
.
Oh.  But to answer the title question of this post, "Will Fr. Cutie be as big a success now that he is married?"
.
I say:  Probably.