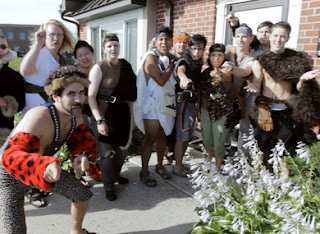 Faerie dust up.
.
Costumed gay protesters glitter-bombed Marcus Bachmann's private clinic to protest counseling practices with patients who claim unwanted homosexual tendencies, as well as acting out their displeasure of Marcus Bachmann's critique of homosexual activists as barbarians.  His wife Michele Bachmann is hoping to be the presidential candidate for the republican party.  The couple is hated by liberals and most gays.
.
I did a post last week about the Bill Maher show and the barbarisms hurled at Michele Bachmann and her husband, as well as Rick Santorum, so if Marcus Bachmann had that in mind when he called gay activists barbarians, I can understand that.  At any rate, the gay barbarians casting glitter and angry epitaphs were trespassing on private property.  Such antics would hardly be tolerated at an abortion facility or Planned Parenthood - in fact if pro-life protesters dared such an action they would be arrested, convicted of a crime and most likely jailed.
.
I know I offended a few gay friends with my Bachmann post, and I'm sure they are offended by this one as well.  I am not a Bachmann supporter, nor am I a proponent of pray the gay away therapy.  In fact I heard the undercover tape of a guy who saw a therapist at the clinic - what the therapist said was beyond stupid - but no one was forcing the guy to sit through it.  That said, if a person who is unhappy with his sexual orientation desires assistance or support in his conflict - there is absolutely nothing wrong if he or she seeks counseling - just make sure the therapists are licensed and have decent credentials.  Transgender people do it all the time, claiming to be unhappy with the gender they were born with, they spend thousands on therapy, hormone treatments, anti-depressants, and surgeries.  If people of faith seek Christian psychological therapy - why are they condemned?  The double standard is hugely obvious when the gay Brown Shirts set about limiting individual freedoms in such cases.
.
As for the verbal, vulgar assaults on Bachmann, I believe the guests on Bill Maher's show were not only advocating violence, but that type of hateful invective has the capability of inciting violence as well.  Remember Gabrielle Giffords.  And don't think that is such an extreme concept these days either.  (Most of the gay people I know are on medication.)  Anyway, I believe Bachmann, just like any other American citizen, deserves to be treated with dignity and respect.  That is all I'm saying - I'm not campaigning for her.  Those who advocate violence, even rhetorically, should keep in mind it comes back to haunt you.  What goes around comes around.
.
One friend told me he felt the conversation on Maher's show was just fine.  He also told me I should not have said Michele was a smart lady because her law degree is fake - he explained she attended Oral Roberts University which evidently wasn't accredited.  I laughed and obediently made a note of it in the comments section of my post:  The Inhospitality of Sodom.  Truth be told, Bachmann has an impressive educational background, and she obviously passed the State bar exams in Minnesota -  not to forget she's a third term Congresswoman.  At this point in her career she has more going for her than Obama had when he became president.  I'm not campaigning for the lady - but let's get the facts straight.
.
I always get myself in trouble with my gay friends.
.
Photo:  Gay barbarians outside the Bachmann clinic.
Posted by Terry Nelson at 11:48 AM