Same Sex Marriage: "When they do that, it's the end." Fr. Paul Marx 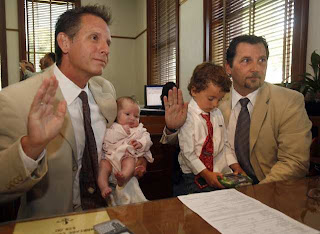 The end of Christian civilization, that is.
.
It is amazing what legalized artificial contraception has led to.  Teens who use artificial contraception today probably have no clue that it was once illegal in the United States, along with abortion and infanticide of course.  Likewise homosexual acts were illegal and homosexuality was recognized as a disorder not only by Christianity, but by psychologists and medical doctors alike.  In our day all of these vices have become legal and acceptable behavior and practice.  None of this could have happened however without what we now recognize as the contraceptive mentality, which changed - revolutionized - society's attitudes regarding sex, marriage and divorce. The marital act got separated from marriage as liberal values took hold, sexual relations were neutralized or 'neutered', as it were, in proportion to their becoming non-reproductive and recreational.  It was only a matter of time that tolerance opened the way to acceptance, thus leading to the ultimate imitation of life foisted upon us today, same-sex marriage.
.
From Fr. Thomas Euteneur of Human Life International:
.
Fr. Marx, in a prophetic sense, saw rightly that a society cannot survive the perverse manipulation of the very structure of reality that God Himself has revealed to us, one very fundamental element of which is the institution of marriage. When we allow that to be changed-"It's the end."
.
So why, you ask, is gay marriage wrong? Let me count the ways.

We must fight against it with our very lives.

While we respect all people as they are, we don't have to respect such a wholesale assault on everything that is sacred to us and good for our society; no, in fact, we must fight against it with our very lives. The question is not whether or not we can win the battle; the question is whether we will join it. Will we accept the challenge to defend the sacred or not? We are called to be faithful and obedient to the Plan of God for our world, and within that, God will bring forth the victory. There is no doubt that, if it is not already there, gay marriage will be coming to your state soon. If we don't fight it, our souls, our families and basically, our very civilization, will find themselves at "the end" of the line in very short order. - Fr. Thomas Euteneur
Posted by Terry Nelson at 10:55 AM