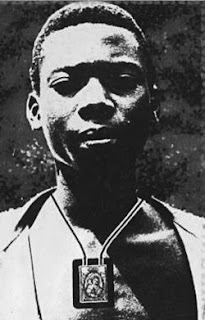 The young Congolese martyr whose feast day is August 15, the Feast of the Assumption...  killed for wearing a scapular.
.
Blessed Isidore was born in 1887 at northeast Republic of the Congo, and at a young age was hired as a domestic boy. Many of the Belgian plantation owners and their agents were avowed atheists, who hated the missionaries because of the latter's defence of the natives' rights and their denouncing of injustices perpetrated against them. "Mon pere" was a pejorative name given to priests and to all that had to do with religion. Isidore soon experienced the hatred of the agents for Catholicism. He asked for leave to return home; permission was refused. He was told to stop teaching his fellow workers how to pray: "You'll have the whole village praying and no one will want to work", one agent shouted at him. Isidore was told to discard his scapular. When he did not, he was twice flogged.
.
The second time, the agent flew into one of his rages. He jumped at Isidore, tore the scapular from around his neck and threw him to the ground. He had two servant boys hold Isidore by his hands and feet and a third domestic flogged him. The whip was made of elephant hide with nails protruding at the end. The writhing Isidore asked for mercy. "My God, I'm dying", he muttered. But the colonizer kept kicking Isidore in the neck and head, and ordered his domestic to scourge him harder still. After 100, those assisting lost count of the number of blows. Isidore's back was one open wound; some of his bones were exposed. After scourging he was thrown, legs chained, into a hut for processing rubber. He could not even move to relieve himself.
.
Since an inspector was due, Isidore was banished to another village. But because he could not walk, he fell by the wayside and hid in the forest. He dragged himself before the inspector, who was horrified at the sight of this modern Job. The inspector himself left a written account of his impression: "I saw a man come from the forest with his back torn apart by deep, festering, malodorous wounds, covered with filth, assaulted by flies. He leaned on two sticks in order to get near me -he wasn't walking; he was dragging himself". The agent appeared on the scene and tried to kill "that animal of mon pere", but the inspector even physically prevented him. He took Isidore to his own settlement, hoping to help him heal. But Isidore felt death in his bones. He told someone who had pity on him: "if you see my mother, or if you go to the judge, or if you meet the priest, tell them that I am dying because I am a Christian".
.
Two missionaries spent several days with him. He devoutly received the last sacraments. He told them the reason for his beating: "The white man did not like Christians.... He did not want me to wear the scapular.... He yelled at me when I said my prayers". The missionaries urged Isidore to forgive the agent; he assured them that he had already done so and that he nursed no hatred for him. This "animal of mon pere", this convert of two-and-a-half years proved that he knew what it meant to follow Jesus - even to the point of being flogged like him, even to the point of carrying the cross, even to the point of dying. The missionaries urged Isidore to pray for the agent. "Certainly I shall pray for him. When I am in heaven, I shall pray for him very much". His agony - more painful than the actual flogging - lasted six months. He died on either 8 or 15 August 1909, rosary in hand and the scapular of Our Lady of Mt Carmel around his neck. - EWTN
.
Blessed Isidore, pray for us that we may be made worthy of the promises of Christ.
Posted by Terry Nelson at 12:01 AM