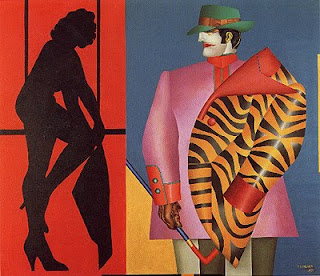 You've come a long way...
.
I totally didn't get Dawn Eden in the beginning - I'm not sure why.  I thought her early 'celebrity' as a Catholic writer and new Catholic wasn't tried enough to be trusted.  I'm like that about other people celebrating their conversions and first fervors and all of that in our day where trend dictates behavior and belief.  Counter-culture chic.  Skepticism bordering on cynicism is a huge fault of mine - unfortunately I've applied the same attitudes towards other bloggers, some of whom ironically have since become internet friends of mine.

I actually began to take Dawn seriously when I realized Fr. Angelo Mary of Mary Victrix did as well.  I read the lady more closely and appreciated what she had to say and trusted she was on the right track.  As she pursues her studies, I'm full of admiration for her, and grateful for her current work on Christopher West's interpretation of theology of the body, warning that West "risks sexualizing Christianity rather than Christianizing sexuality".  Eden, author of "The Thrill of the Chaste" ought to know, since her conversion to Catholicism led her to leave behind a pretty hip Sex in the City type lifestyle.
.

Critically examining Christopher West’s presentation of John Paul II’s Theology of the Body, chastity speaker Dawn Eden has said that West conveys “elements of truth.”  However...
.
Eden, the author of the book “The Thrill of the Chaste,” gave her critique in a master’s thesis at the Pontifical Faculty of the Immaculate Conception at the Dominican House of Studies in Washington, D.C. She delivered a speech on her thesis there on May 19, posting the speech’s text on her blog “The Dawn Patrol.”
.
Her thesis tried to view the Theology of the Body through the “hermeneutic of continuity,” a view that sees the Catholic Church after the Second Vatican Council as continuous with the pre-Vatican II Church.

.
While West tries to undermine the idea that the Church has a negative view of sex, in Eden’s view he fuels another myth that the Church is fundamentally different after Vatican II. She cited West’s comments that the Theology of the Body is “revolutionary” because previous generations of Christians grew up under a “repressive approach” to sexual matters. - CNA