Liking English in the Liturgy. 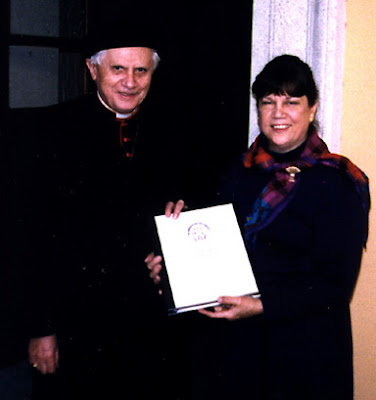 Is that bad?
.
Helen Hull Hitchcock of Adoremus was on EWTN last evening with Fr. Pacwa.  It was an interesting discussion about the coming changes to the Roman Missal.  I liked how they traced the history of the liturgical movement/changes back before Vatican II.  The movement appeared to be in the works during the reign of Pius X, who apparently coined the term, "active participation".  If the program is aired again, try to watch it.  (Tell me if you think Hitchcock had a cocktail or two before airing - just to settle her nerves or something.  I know.)
.
Anyway, leaving adoration yesterday evening, the 'ladies' were discussing the coming changes to the Missal - one had just found out about it and was telling the others about it.  Now I never, ever get involved in church talk, especially at church and about liturgical stuff - if I can avoid it I should say.  But they asked me if I knew about it and I said I had heard some rumblings.  LOL!  These women obviously do not read Catholic blogs.  For instance...
.
Mary I:  "Well did you know they want more Latin back?  What are they doing, going back before the Vatican Council?"
.
Mary II:  "Whatya mean Latin - who understands that?  Gosh - I used to get so bored when Mass was in Latin."
.
Mary III:  "Oh I kind of liked it - we had to learn it in school - remember the Gregorian chant books?  I wouldn't mind it if just a few parts were in Latin - once in awhile - it's pretty.  We could use Missals again."
.
Terry:  "And wear doilies on your head."  Everyone laughs.
.
So anyway - they asked me:
.
Mary II:  "Terry, had you heard about this?"
.
Terry:  "A little - they are just correcting the translations and it's been going on forever.  I don't think it will result in anything drastic.  So, all of you prefer English pretty much then, huh?"
.
Mary I:  "Heck yes - otherwise you don't know what's going on.  I was so happy when the Mass was in English - even the readings were in Latin before."
.
Mary II:  "They were?  I don't remember that."
.
Terry:  "Yeah, but the priest rattled them off in English right after.  They zipped through Mass like nothin'"  I said cracking myself up, remembering ol' Shot-gun Kelly... he could get through a Novus Ordo Mass in 10 minutes.
.
Mary III:  "Why can't they just leave stuff alone - why'd they ever change it in the first place?  Couldn't they just have said the old Mass in English?"
.
Mary II:  "I like the new Mass."
.
Terry:  "From what I'm told - and read online - they say young people really like the old Mass and  want it back...."
.
All 3 Marys:  "Who?  Who?  Who says?  The kids here don't.  How would they even know - they never grew up with it?  They have never experienced it before."
.
Mary II:  "Just kids - they always have to be different - wait until they're old."
.
Mary III:  "You are young, do you like Latin Terry?"
.
Terry:  (I know - these women think I'm a kid.)  "It's okay - I grew up with the old Mass, as an altar boy I understood the Latin - I knew what I was saying.  The nuns drummed it into us - remember the Gregorian chant classes?  I like English though - and now - at least with the new Missal, Mass has a better chance of being said with greater reverence."
.
Mary I:  "Why - what's wrong with the way Father says it now?"
.
Terry:  "I don't mean here - but generally - sometimes, elsewhere,  liturgical abuses have crept in..."
.
And then the conversation veered off in that direction and I excused myself.
.
The End
.
Anyway - watch the EWTN interview with Hitchcock - I hope those women did.
.
(Obviously every woman at my parish over the age of 79 is named Mary. I know.)
.
Photo:  Hitchcock and Cardinal Ratzinger
Posted by Terry Nelson at 11:10 AM