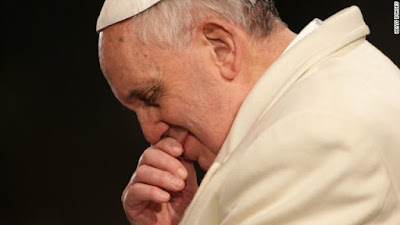 About the homosexuals in the Vatican.

I love this Pope.

ROME - A prominent advocate in the fight against clerical abuse has said that during a recent private audience at the Vatican, Pope Francis told him he’d read Inside the Closet at the Vatican, a book about homosexuality in the Catholic Church, and said that he was already aware of many of the priests mentioned in it who are gay.

“He said he read it. He said it was good and that he knew of many of them. We discussed good gays and the gays who are evil, but because of power,” the advocate said in a text message obtained by Crux. - Source

There are some who would like to throw out every priest who may be attracted to men, or have homosexual inclination, yet live a chaste and celibate life, the Holy Father clearly distinguishes between 'good gays and evil gays', to quote the words of the article.  He doesn't over-react or surrender to inside-outside pressures and 'homobobic' calls to purge the priesthood of all gays, and so on.  I keep seeing signs of his patience and discernment, calling the Church, priests and laity alike to repentance and conversion, and to seek God from whatever reality wherein they find themselves.

“Giving more importance to the adjective rather than the noun, this is not good. We are all human beings and have dignity. It does not matter who you are or how you live your life, you do not lose your dignity. There are people that prefer to select or discard people because of the adjective - these people don’t have a human heart,” Francis told Stephen K. Amos


Ed. note:  The Holy Father is on record stating that it is better not to admit homosexuals to seminary/religious life and Holy Orders, in accord with norms already set.
Posted by Terry Nelson at 12:16 PM