More thoughts on the errors of Russia ... 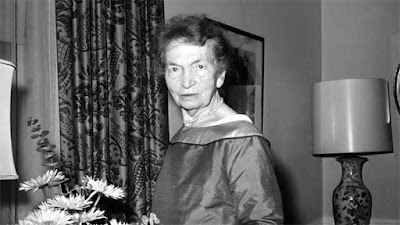 Nearly 100 years ago, Our Lady of the Rosary warned at Fatima that Russia would spread her errors ...

How clearly do we see that now?  I was re-reading Roy Schoeman's book, Salvation Is From The Jews the other day - looking for references on Nazi Germany and abortion, and once again ran across Margaret Sanger's name in connection with Nazi eugenics, birth control, and so on.  Sanger's sympathies were very much in line with Nazism.  Interestingly enough, her views dovetailed with Theosophical thought as well (another error promulgated from Russia) - which in turn influenced the ideology of neo-pagan Nazism.  Sounds convoluted and theoretical - but we shouldn't be so dismissive because of that.  I mention these connections to point out the influences which formed Margaret Sanger and the foundation of Planned Parenthood ... the lavishly endowed, gilded lily of the eugenics movement.

I came across an interview at Catholic World Report with Dr. Paul Kengor, author of "Takedown: From Communists to Progressives, How the Left Has Sabotaged Family and Marriage".  Whose name pops up?  Marge Sanger.  A couple of excerpts from that interview:

CWR: You show how the Bolshevik revolution took direct aim at both marriage and Christianity. What were some practical ways in which Lenin sought to destroy both? Is there a direct correlation to how both are being attacked and undermined today in the U.S. and the West?

Dr. Kengor: Lenin and the Bolsheviks immediately went after God/religion, private property, and marriage and family. They radically liberalized all divorce and abortion laws. You weren’t free in Bolshevik Russia to have freedom of religion, press, assembly, speech, or property, but, wow, if you wanted a divorce or an abortion, you were the freest person on the planet! The sky was the limit. And in very short course, Russia soon had divorce and abortion rates unseen in the history of the world. In fact, the abortion rate got so bad that it astounded Planned Parenthood founder Margaret Sanger, who took a fact-finding trip to the Soviet Union in 1934, and even stunned Stalin, who, in 1936, was forced to ban abortion out of fear that his country would soon cease to exist. Russian women were annihilating the future generation. This madness had to be stopped or there would be no communist Russia.

As far as the correlation to America and the West today, our rates of divorce and abortion have never been as bad as communist Russia, but they’ve certainly been bad enough. We’ve seen divorce rates near 50% and experienced the extermination of nearly 60 million unborn babies in America since Roe v. Wade in 1973. And in other areas, such as birth control and the condemnation of those who oppose birth control and abortion on moral-religious-political grounds, we in America today stand where Bolshevik Russia stood eight decades ago. In the book, I have a full chapter on Margaret Sanger. Sanger wrote this upon her return from communist Russia in 1934: “Theoretically, there are no obstacles to birth control in Russia. It is accepted … on the grounds of health and human right…. We [in America] could well take example from Russia, where there are no legal restrictions, no religious condemnation, and where birth control instruction is part of the regular welfare service of the government.”

What really strikes one about reading this assertion today is how modern liberal Democrats in America have arrived at Sanger’s Bolshevik ideal, where Planned Parenthood’s services have become, in their mind, “part of the regular welfare service of the government,” just like in Stalinist Russia. If you disagree with today’s “progressives” on funding Planned Parenthood or the Obama HHS mandate or whatever, they accuse you of favoring a “war on women.” In many areas, as I show in the book, today’s liberals are just a few decades behind the communists. - Read the entire interview at CWR

To quote John Lennon, "You say you want a revolution?"  It happened.  It's now.  Progressivism.  Change.  Constant revolution.

You are waiting for a sign?  A miracle?  A heavenly intervention?  It happened.  In 1917.  We were warned and now we are reaping the effects of ignoring the warning.