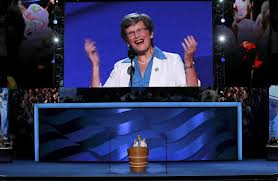 Last night I had to go to a neighborhood crime watch meeting.  We discussed installing bunkers for the coming civil war.  I'm taking the role of Daddy - Hyacinth's daddy from Keeping Up Appearances.  We are looking for looters who remove yard signs.  Seriously, there's been a rash of 'mobile drug dealing' in the area.  I was so tempted to ask that if we catch the drug dealers, can we keep the drugs that were confiscated, but no one gets my humor.

So anyway.  I found out I missed Sr. Simone's 'pro-life' presentation at the DNC Reality Show*.  Evidently Sr. Simone explained her pro-life views with anecdotes in support of Obamacare - yet before all of that, she told an interviewer, making abortion illegal was beyond her 'pay-grade'.  Sounds like her boss, huh?  Obama said the same thing once.  Anyway, she sums up her pro-life commitment this way:


The Affordable Care Act will cover people like Margaret. We all share responsibility to ensure that this vital health care reform law is properly implemented and that all governors expand Medicaid coverage so no more Margarets die from lack of care. This is part of my pro-life stance and the right thing to do. - NCR

Their motherhouse is a bus.

At least she said 'pro-life' - yet oddly enough, she did not close with "God bless you!"   What was most revealing about Campbell's talk - at least for me - is how that mindset works - being pro-life and yet not knowing "if she supports laws protecting the lives of unborn children".  It's feminist screwball logic at work.  The sisters seem to me to be sisters of feminism, definitely 'seculareligious', working for a secularized catholic church.  Although they claim to be cooperators with the nations Bishops:


We agree with our bishops, and that's why we went on the road: to stand with struggling families and to lift up our Catholic sisters who serve them. - Campbell

Last evening was "Ladies Nite" that is for sure.  Sandra Fluke made that perfectly clear.  I only know her from what Catholic blogs have said about her and so I kept thinking, "This is the woman who's a slut and seeks Government aid to buy contraceptives and have access to abortion if need be."  That's pretty much what the blogs have said, so I was completely unable to warm up to her - although all the women in the audience loved her.  (Oh! Oh!  I'm not saying Fluke is a slut - I'm just repeating what I noticed other people wrote - which ruminated with me while I watched her speak.  Although I'm told women with slut buttons are indeed at the convention, so I'm thinking it's not a shameful term any longer.  What?)


“In that America, your new president could be a man who stands by when a public figure tries to silence a private citizen with hateful slurs. Who won’t stand up to the slurs, or to any of the extreme, bigoted voices in his own party,” she claimed. “It would be an America in which you have a new vice president who co-sponsored a bill that would allow pregnant women to die preventable deaths in our emergency rooms..."  Scare tactics from Ms. Fluke

Last night the show was determined to convince women that their rights will be taken away if they do not vote for Obama, and abortion is their right - or at least above anyone's pay-grade or ability to do anything about.  Which begs the question:  "In that case, are women really free?  Where is the choice?"  You either agree to abortion rights or you get thrown under the bus.

I enjoy him.  He enjoys himself - and that is always fun to watch him do.  One must always do copious fact-checking on everything he says however.  The Dems reality show format is getting to be a bit surreal now.

Best comment ever - in response to Elizabeth Warren's assertion:


"Jobs grow from the bottom up."

*FYI:  I'm watching the convention as someone might watch a so-called reality tv show - and commenting accordingly.  It's a great study - very Orwellian. 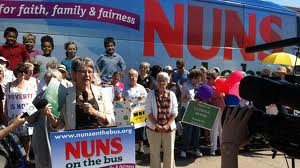 Email ThisBlogThis!Share to TwitterShare to FacebookShare to Pinterest
Labels: blame it on the Novus Ordo, DNC notes, populist culture