WOW! What if the Vatican really IS the seat of the antichrist? 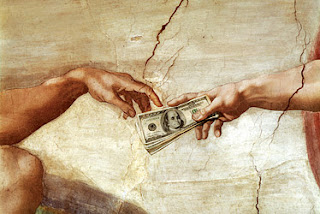 The document said the current global financial crisis has revealed "selfishness, collective greed and the hoarding of goods on a great scale." A supranational authority, it said, is needed to place the common good at the center of international economic activity.

The 41-page text was titled, "Toward Reforming the International Financial and Monetary Systems in the Context of Global Public Authority." Prepared by the Pontifical Council for Justice and Peace, it was released Oct. 24 in several languages, including a provisional translation in English.

The document cited the teachings of popes over the last 40 years on the need for a universal public authority that would transcend national interests. The current economic crisis, which has seen growing inequality between the rich and poor of the world, underlines the necessity to take concrete steps toward creating such an authority, it said. - CNS
.
Money, money, money $$$!  Gimme $$$!
.
Holy crap Batman!  What does this mean?  Vatican approval for the Occupy Wall Street/ overthrow capitalism crowd?
.
Just kidding.  Or am I?  At any rate, don't worry, I'm sure there will be a retraction in the morning.  Fr. Z has a call into  Fr. Sirico at the Acton Institute - keep tuning in.

.
I believe in God.
.
Good news - Thomas Peters clears it all up for us here.
.
I still believe in God, the Father almighty...
Posted by Terry Nelson at 3:03 PM

Email ThisBlogThis!Share to TwitterShare to FacebookShare to Pinterest
Labels: Having fun with investments and capital