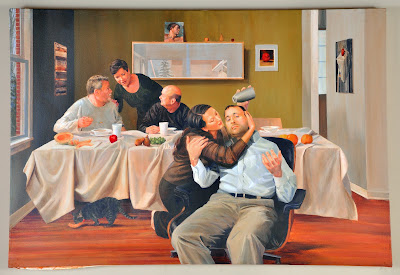 An adoration story.
.
Several weeks ago, I entered my parish church for my afternoon of adoration.  After doing this for so long I'm afraid I sometimes approach my scheduled time rather routinely.  That day I noticed an older woman parishioner polishing the black marble communion rail.  While the Blessed Sacrament was exposed.  Two other women I know were just finishing up their hour and I called one of the ladies over to ask her about the cleaning lady.
.
Actually, she wasn't a cleaning lady at all, but a long time parishioner.  An elderly lady who dressed very young; capri pants with an un-tucked shirt and rolled-up sleeves over a modest t-shirt, nicely cut and colored hair, light make-up - she could pass for a much younger woman.  I'd noticed her before, sometimes during Mass, moving about the church, and I wondered if she had some sort of mental problem.  I asked my adoration friend that very question - "Is she nuts?  I don't think it is appropriate to be cleaning during adoration, passing back and forth before the Blessed Sacrament like that."
.
"Oh no!"  My friend laughed.  "She's just fine - why would you think she is crazy?  Anyway, she's been here for better part of an hour and we just let her do it.  I suppose it isn't the right thing to do, but I'm sure she'll be finished soon."
.
Nevertheless I felt rather indignant and considered saying something to the woman.  I tried to pray but was distracted watching everything she was doing.  She applied polish, and then buffed it to a bright shine, leaving a section and moving on to repeat the same procedure.  At times she would step back and admire her work.  Each time she crossed in front of the monstrance she bowed reverently and proceeded with her job.  I was slightly relieved after she left for a bit, imagining she was finished - although I noticed she hadn't returned some things she had moved back to their proper place.
.
I tried to pray but remained distracted, and of course, that particular day, the thought of spending an afternoon in adoration felt burdensome, and I was already cranky anyway.  The lady returned with her buffing equipment and really threw herself into finishing the job, and so I decided to join my prayer to her work and began offering what she was doing to our Lord, thanking him for her devotion - I suddenly regained my peace!  It seemed that in very little time she was finally finished, returning everything to its proper place as well.  After the equipment was put away, she knelt on the bare floor for what seemed to be a very long time, in devout, attentive prayer before the Eucharist.
.
I was so edified, my hair sort of stood on end and I was suddenly deeply humbled at the sight of this woman praying, oblivious to anything around her.  I somehow understood how pleasing she was to Our Lord.  She came in and anointed his feet as it were... she did what she did out of love and with great faith.  I on the other hand - the only other person in the church at the time - had wanted to rebuke her.  In my heart I had condemned her and scoffed at her.  I came to adoration without charity...  only doing my duty... and did it begrudgingly, routinely.  Yet the 'cleaning lady' gave everything she had - and with great love.
.
Love is repaid by love alone.
.
Art:  Jesus Anointed at Bethany, Donald D. Krause


.
(Later it occurred to me that the woman may have been unable to sit still for very long due to some physical disability.  Regardless, it wasn't any of my business.)
Posted by Terry Nelson at 11:11 AM