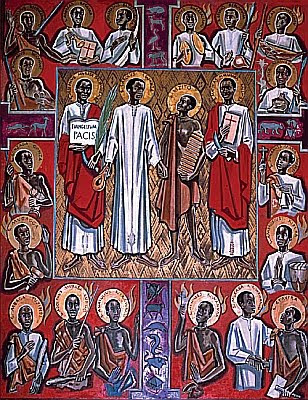 Saint Charles Lwangda and Companions
.
I always find it ironic that the feast day of a group of martyrs who were put to death for refusing King Mwanga of Uganda homosexual advances is celebrated during what has come to be known as Gay Pride Month.  Though many Christians were killed by Mwanga, a group of pages were sentenced to death not only out of hatred for the faith but for resisting homosexual relations with the King.  Homosexuality is a cultural taboo in Uganda to this day, although it is believed the king learned and acquired the practice from the Arabs. (Source)  Since certain cultural taboo were more or less ratified by Christianity, while other practices such as polygamy were condemned, Mwanga sought to rid the country of the new religion and all Christians.
.
The story of the martyrs is at once gruesome and edifying.  Imagine accepting torture and death rather than committing a sexual sin which has become so commonplace in our day?  The sacrifice of the martyrs demonstrates that conquering sin is indeed possible for anyone, and their witness offers the Christian great hope, reminding us how they "endured the opposition of sinners", thus encouraging us, "do not grow despondent or abandon the struggle."  Their intercession is powerful before God, for their blood cries out on our behalf, encouraging us...  "In your fight against sin you have not yet resisted to the point of shedding blood." - Hebrews 12: 3-4
.
St. Charles and Companions pray us.
Posted by Terry Nelson at 12:00 AM