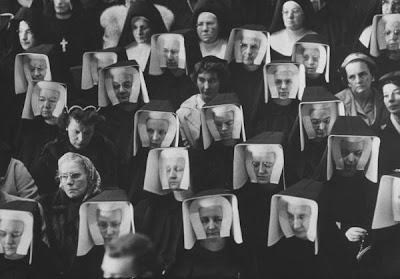 The heroism of women religious.
.
This photo of nuns was taken at the funeral for the numerous victims who died in the tragic fire that consumed Our Lady of the Angels School in Chicago, December of 1958. The nuns proved heroic in rescuing the children who survived. Sadly, as I was told at the time, one entire class was found, dead from smoke inhalation; the trapped Sister and students seated in prayer. I read that another Sister repeatedly rolled down the flights of stairs with children clinging to her habit, to evacuate as many as possible beneath the heavy smoke.
.
Those Sisters exemplified the heroic charity every School Sister in the United States daily exercised in their vocation to teach and guide Catholic students in the faith, arts, and sciences. People my age may claim all the nuns were mean or disgruntled, but that type of religious was really the exception. Most of the priests, nuns and brothers who taught school, though strict, were generous, loving, and devout men and women dedicated to their vocation and educating the young.
.
Catholic schools in crises?
.
That is what the NY Times says. Many are closing due to lack of enrollment. However, laity, clergy and religious alike are beginning to come together to correct that - as much as they are able to at this point. Yet I believe the bishops are the ones who really need to promote Catholic education, just as they did in the beginning. Up until a decade or so ago, the Catholic school system seemed to be an institution that was pretty much taken for granted - something that would always be there. Religious vocations may have diminished, but lay teachers took their place - albeit at much greater expense. Hence the increased cost of education - and the sad realization we may have taken the nuns for granted as well.
.
A local priest reopens his school.
.
I went to Mass at Holy Family parish this morning. It is a strong parish situated in St. Louis Park, Minnesota. The pastor, Fr. Thomas Dufner is a very solid, spiritual, and dynamic priest. He seems to be an excellent administrator as well. I believe he made it his personal goal to reopen Holy Family Academy, which he did, and it is prospering. While the parish is growing, it is also very active, and they need to expand and build a parish center. Which points to the obvious fact, the care of souls is Fr. Dufner's number one priority.
.
He also has a crowd of altar boys who serve Sunday Mass. A church full of young families with lots of kids - who kneel and follow Mass attentively, reverently, and quietly. It is so edifying to be there early on a Sunday morning and see Father in adoration before the Blessed Sacrament two hours before Mass, one hour before he hears confessions.
.
Likewise, every Saturday morning Fr. Dufner stands outside an abortion facility in Robbinsdale, Minnesota, praying the rosary with a group of other pro-life people - he has done this for years. He is also very active with the youth in his parish, and nourishes his entire flock with solid spiritual instruction and direction, while providing for fun, wholesome recreation. He is one of the most dedicated priests I have ever seen, and I think the parish loves him and supports his initiatives.
.
Bishops, priests, and religious like Fr. Dufner is what the Church in the United States needs to revive Catholic identity, Catholic education, and Catholic morality in our culture.
.
Photo source: Life Magazine. When I came across the photo I thought it was a photo of rows of television sets. This particular photo demonstrates why habits needed to be modified.
Posted by Terry Nelson at 12:16 PM