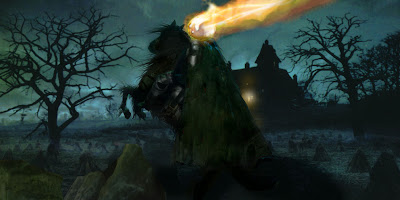 Hollowed out already.
I went to Target to get props - they had no fake cobwebs - just about everything was sold out. So I bought a fogger and a strobe "lightning" machine. I took it all back - the fogger had too many warnings and the strobe was just too disco.
I did buy some skulls to mount on my stakes. I bought white bags and Shabat candles for the luminaries, and Wednesday morning I will probably go out to buy the dry ice to make my own fog. Oh - I bought real pumpkins too - white ones. Of course I bought candy - but I capitulated and bought the normal stuff most people buy, Snickers, Hersheys, Mounds, etc. I was going to give out holy cards of the saints as well, but considered everyone may not be Catholic. Plus, this isn't my old job. (I had an All-Saints party each year at the store and gave out candy and holy cards and religious trinkets - people loved it. Kids would come in costumes of their favorite saint and we had a coloring contest with prizes. I don't think they did it this year.)
I'm no longer in the mood to give out candy. I'll do it, but maybe I'll just throw the candy out the window as the kids come up the stairs. That way I won't have to talk to them and say how cute they are and all that crap.
Posted by Terry Nelson at 6:16 PM

Email ThisBlogThis!Share to TwitterShare to FacebookShare to Pinterest
Labels: Holidays are over-rated