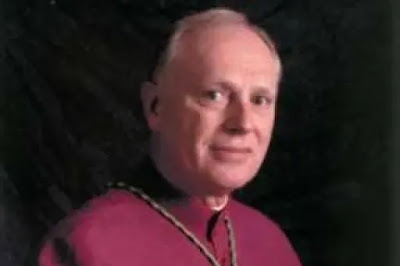 "On the other hand, every man is a liar, infirm, unstable, and subject to fail, especially in words; so that we ought not readily to believe even that which in appearance seems to sound well.

How wisely did you forewarn us to beware of men, and that a man's enemies are they of his own household, and that we are not to believe, if anyone should say, 'Behold here! or Behold there!'" - Imitation, Bk. III, Ch. 45

Bishop Emeritus Howard J. Hubbard
Not much to say on this story - pretty much just documenting it.  The details are indecent.  The bishop who transferred guilty priests was guilty himself.  Rather creepy, actually.  In this case there appears to be a localized network.  It makes more sense now why McCarrick got away with his crimes.  It really annoys people who were made to feel shame and cast off, just because of who they were or how they identified, even when they strived to live in accord with Catholic teaching, while the upper class hierarchy lived double lives, engaged in binding up heavy burdens too heavy to carry, without ever lifting a finger to help.
QUEENSBURY — Two brothers who grew up in Warren County in a devout Catholic family allege that Gary Mercure, a former priest in their childhood parish who was later convicted of raping young boys in Massachusetts, had sexually abused them on multiple occasions over a period of years and that ex-Albany Bishop Howard J. Hubbard took part in some of the assaults. - Full story

In 2004, Hubbard was accused of having had a regular homosexual affair with one Thomas Zalay in the 1970s. Zalay committed suicide in 1978 at the age of 25. His suicide note was later found by his brother, and read, in part, as follows: 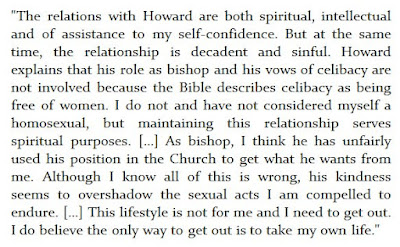 The same year, one Anthony Bonneau came forward to claim that Hubbard had solicited sex from him during his time as a teenage prostitute working in Albany's Washington Park in the 1970s. Like Zalay's family, Bonneau did not seek financial compensation.
Posted by Terry Nelson at 3:31 PM

Email ThisBlogThis!Share to TwitterShare to FacebookShare to Pinterest
Labels: All have gone astray