With deep anxiety and growing surprise ... 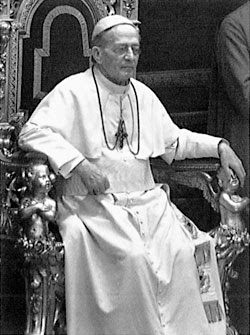 The Letter of Pius XI to the Bishops of Germany in 1937 should maybe be read again.

It seems to me we live in similar conditions.  This is not to  call any leader a Hitler or a Stalin, nor cite any political party Nazi or Communist, because corruption and a general lack of morality is widespread and pervasive, crossing party lines, so to speak.  I thought the following section especially timely for anyone confused by the various ideologies which infect our culture.

To hand over the moral law to man’s subjective opinion, which changes with the times, instead of anchoring it in the holy will of the eternal God and His commandments, is to open wide every door to the forces of destruction. The resulting dereliction of the eternal principles of an objective morality, which educates conscience and ennobles every department and organization of life, is a sin against the destiny of a nation, a sin whose bitter fruit will poison future generations.

30. Such is the rush of present-day life that it severs from the divine foundation of Revelation, not only morality, but also the theoretical and practical rights. We are especially referring to what is called the natural law, written by the Creator’s hand on the tablet of the heart (Rom. ii. 14) and which reason, not blinded by sin or passion, can easily read. It is in the light of the commands of this natural law, that all positive law, whoever be the lawgiver, can be gauged in its moral content, and hence, in the authority it wields over conscience. Human laws in flagrant contradiction with the natural law are vitiated with a taint which no force, no power can mend. In the light of this principle one must judge the axiom, that “right is common utility,” a proposition which may be given a correct significance, it means that what is morally indefensible, can never contribute to the good of the people. But ancient paganism acknowledged that the axiom, to be entirely true, must be reversed and be made to say: “Nothing can be useful, if it is not at the same time morally good” (Cicero, De Off. ii. 30). Emancipated from this oral rule, the principle would in international law carry a perpetual state of war between nations; for it ignores in national life, by confusion of right and utility, the basic fact that man as a person possesses rights he holds from God, and which any collectivity must protect against denial, suppression or neglect. To overlook this truth is to forget that the real common good ultimately takes its measure from man’s nature, which balances personal rights and social obligations, and from the purpose of society, established for the benefit of human nature. Society, was intended by the Creator for the full development of individual possibilities, and for the social benefits, which by a give and take process, every one can claim for his own sake and that of others. Higher and more general values, which collectivity alone can provide, also derive from the Creator for the good of man, and for the full development, natural and supernatural, and the realization of his perfection. To neglect this order is to shake the pillars on which society rests, and to compromise social tranquillity, security and existence. - Mit Brennender Sorge 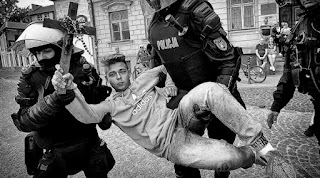 Email ThisBlogThis!Share to TwitterShare to FacebookShare to Pinterest
Labels: Moral and natural law, Sign of the times