Pope Francis: “I am concerned because we hear speeches that resemble those of Hitler in 1934.” 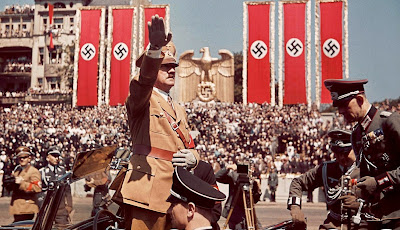 In light of the concerns Pope Francis expressed regarding the emergence of nationalism and political rhetoric of isolationism - a concern I share BTW: “I am concerned because we hear speeches that resemble those of Hitler in 1934.”  I want to link to a great article on how Trump is emulating Hitler's rise to power.  Don't freak out - no one is suggesting Trump is heading toward some 'final solution' to make America white again, as Burt Neuborne, the author of the book When at Times the Mob Is Swayed: A Citizen’s Guide to Defending Our Republic makes clear: "I don’t for a moment believe that Trump admires what Hitler eventually did with his power [genocide], but he damn well admires—and is successfully copying—the way that Hitler got it.”
People on FB seemed to disagree with what the Holy Father says, or they immediately assume he's picking on Trump, yet comparisons with fascist speeches from the 1930's is not difficult to do.  I found a very good article on Neuborne's book (cited above) comparing Trump's style to Hitler's rhetoric and policies, which sheds some light on what the Holy Father may be talking about. Though it needs to be repeated that the Pope didn't name Trump, nor is Trump alone among leaders to foster nationalism.  Elsewhere in the world nationalism is gaining a great deal of support in reaction to the ongoing migrant and economic crisis.


Here are 20 serious points of comparison between the early Hitler and Trump.

1. Neither was elected by a majority. Trump lost the popular vote by 2.9 million votes, receiving votes by 25.3 percent of all eligible American voters. “That’s just a little less than the percentage of the German electorate that turned to the Nazi Party in 1932–33,” Neuborne writes. “Unlike the low turnouts in the United States, turnout in Weimar Germany averaged just over 80 percent of eligible voters.” He continues, “Once installed as a minority chancellor in January 1933, Hitler set about demonizing his political opponents, and no one—not the vaunted, intellectually brilliant German judiciary; not the respected, well-trained German police; not the revered, aristocratic German military; not the widely admired, efficient German government bureaucracy; not the wealthy, immensely powerful leaders of German industry; and not the powerful center-right political leaders of the Reichstag—mounted a serious effort to stop him.”

2. Both found direct communication channels to their base. By 1936’s Olympics, Nazi narratives dominated German cultural and political life. “How on earth did Hitler pull it off? What satanic magic did Trump find in Hitler’s speeches?” Neuborne asks. He addresses Hitler’s extreme rhetoric soon enough, but notes that Hitler found a direct communication pathway—the Nazi Party gave out radios with only one channel, tuned to Hitler’s voice, bypassing Germany’s news media. Trump has an online equivalent.
“Donald Trump’s tweets, often delivered between midnight and dawn, are the twenty-first century’s technological embodiment of Hitler’s free plastic radios,” Neuborne says.

3. Both blame others and divide on racial lines. As Neuborne notes, “Hitler used his single-frequency radios to wax hysterical to his adoring base about his pathological racial and religious fantasies glorifying Aryans and demonizing Jews, blaming Jews (among other racial and religious scapegoats) for German society’s ills.” That is comparable to “Trump’s tweets and public statements, whether dealing with black-led demonstrations against police violence, white-led racist mob violence, threats posed by undocumented aliens, immigration policy generally, protests by black and white professional athletes, college admission policies, hate speech, even response to hurricane damage in Puerto Rico,” he says. Again and again, Trump uses “racially tinged messages calculated to divide whites from people of color.” - Finish reading here.


I'm amazed that many Catholics mistrust the Pope, yet place so much confidence in Trump and his nationalistic policies. 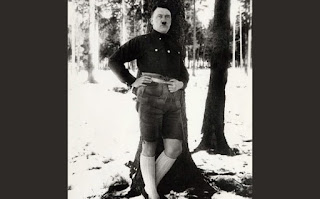 Email ThisBlogThis!Share to TwitterShare to FacebookShare to Pinterest
Labels: soon to be assuming dictatorial powers