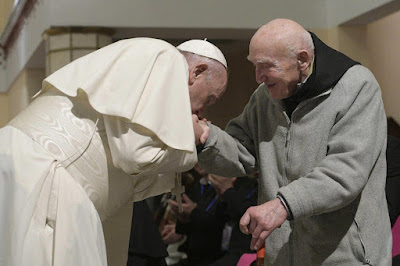 Father Jean-Pierre Schumacher,
who survived a massacre of Trappist monks
by Islamists in Algeria in 1996.


What he did and what he said.

I'm so grateful that he just keeps going, aware of all the problems, aware of all that is said against him, he has his face firmly set to continue his journey and mission.  This is why we have a pope, to strengthen and confirm us in the Faith.

I was so impressed when he greeted one of the surviving monks of  the Atlas Abbey of Tibhirine - it seemed to me to support the Holy Father's mission to find peace and understanding with Islam.  Recalling the last testament of Dom Christian de Chergé, it seems to the martyr's testament somehow defines the Church's approach to Islam.  Bl. Christian did not desire to have his beloved Algerians to be made responsible for his death...


I could not desire such a death. It seems to me important to state this. I do not see, in fact, how I could rejoice if this people I love were to be accused indiscriminately of my murder. It would be to pay too dearly for what will, perhaps, be called “the grace of martyrdom,” to owe it to an Algerian, whoever he may be, especially if he says he is acting in fidelity to what he believes to be Islam. I know the scorn with which Algerians as a whole can be regarded. I know also the caricature of Islam which a certain kind of Islamism encourages. It is too easy to give oneself a good conscience by identifying this religious way with the fundamentalist ideologies of the extremists. For me, Algeria and Islam are something different; they are a body and a soul. I have proclaimed this often enough, I believe, in the sure knowledge of what I have received in Algeria, in the respect of believing Muslims—finding there so often that true strand of the Gospel I learned at my mother’s knee, my very first Church. - Bl. Christian

And may we find each other,
happy “good thieves,” in Paradise,
if it pleases God, the Father of us both. Amen.

The Holy Father continues to clarify Catholic teaching on homosexuality.

Faithful to Catholic teaching on homosexual acts, the Pope made clear that "homosexual tendencies “are not a sin.”

Asked about his famous soundbite “Who am I to judge?”, the pope said, “Tendencies are not sin. If you have a tendency to anger, it’s not a sin. Now, if you are angry and hurt people, the sin is there.”

“Sin is acting, of thought, word and deed, with freedom,” Francis said.

Asked by Spanish journalist Jordi Evole if he thinks it’s a “rarity” for parents to have a homosexual child, the pope answered that “in theory, no.”

“But I’m talking about a person who is developing, and parents start to see strange things … Please consult, and go to a professional, and there you will see what it is and may not be homosexual, that is due to something else,” he said.

Francis also said that in his opinion, it’s usually challenging for a family to have a homosexual child, as they can be “scandalized by something they don’t understand, something out of the ordinary … I’m not making a judgement of value, I’m doing a phenomenological analysis,” he said. - Crux

It seems to me he is not speaking of 'conversion therapy' but rather discernment in understanding if the inclination is 'fixed' as it were.  (The only difficulty I have with that advice is that many people can't afford to take their kids to a professional, others do not have access or insurance and so on.  Likewise, as history demonstrates, some professionals may not be competent.  Just saying.)  Others will disagree, but I never think the Pope departs from Catholic teaching, nor does he condemn homosexual persons.  Not even priests - if they are faithful to their vocation and Catholic teaching.

In the interview, the Holy Father makes it known he is aware of all the criticism, especially regarding the abuse crisis and how some victims are not happy about how it is being handled.   He gets that.


The concrete result of the summit, he argued, was to “start processes, and this takes time,” he said, but it’s the only way “for the cure to be irreversible.” - Crux

I don't regret having confidence in God and trusting his providence which gave us Pope Francis.  I do not regret my confidence in Pope Francis, and conviction that he is a faithful servant of God, and true son of the Church.  Even when I may not understand the sketchy journalism which interprets his words and actions in a worldly, often profane sense contrary to Catholic teaching, and or, in a way which will be controversial.  To use the Pope's words, media can report on such things in a way that "is ill-intentioned.”  Those who dislike the Pope run with that sort of reporting.

Email ThisBlogThis!Share to TwitterShare to FacebookShare to Pinterest
Labels: In Thanksgiving, pope francis in morocco