The Contagion of Catholic Scorn for Pope Francis. 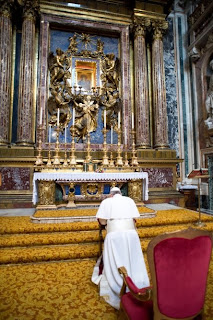 It isn't just so-called 'liberals' who can be accused of trying 'to build a wall between Francis and Benedict'.

Catholics who dislike Francis are accusing the Pope of 'snarky comments' during his homilies at Mass.  They wonder who he is talking about?


He fills his own daily fervorini with snarky comments about hard to identify groups of people.


Other critics are compiling lists for The Pope Francis Little Book of Insults.

Others say he 'makes digs' at people and economic systems.


I do seriously wonder if he has dementia. "Rambling" is the kindest one can say about some of the utterances.

Reminds me of something I read elsewhere:


How the Devil works to undermine and reduce the priest and priesthood (and papacy)!  People are all to willing to do the Devil’s work when it comes to this sine qua non of our salvation and God’s plan.

+ + +
Sometimes we may not know of what spirit we speak.
Worse than that, sometimes we do, insisting we have a right to do so.  Over the years I've known many devout Catholics who knew more than the Pope - some even boasted they were more Catholic than the Pope.  I encountered such people during the reigns of Paul VI, John Paul II, and Benedict XVI.  Some of them were priests and religious, and some of them abandoned their vows, frequently because they knew more than the Pope.
Many more were laity.  Well educated in theology and dogma.  One friend left to join a Protestant group.  I remember how surprised I was after he wrote to me how wrong Catholic devotion to the Blessed Virgin was.  At one time the poor man claimed contemplative graces from God in prayer - and he was most likely correct.
Another woman I knew - exorcised from demons, she claimed - a faithful follower of a rather charismatic, albeit strictly traditionalist, deliverance priest, she too abandoned the Church.  She studied and knew all the encyclicals and especially the Syllabus of Errors - nearly by heart - she 'searched the documents for eternal life', and used what she found to condemn those who didn't measure up.  She condemned Pope John Paul II as a heretic.  She told people who didn't measure up to her standards that they were going straight to hell, with all their protestant relatives.  She literally wore her religion on her sleeve, draping herself in medals and crucifixes and scapulars, etc..  She had a big orthodox voice online at one time.  Then one day - she blew it all off and returned to her old religion, Wicca.
I've known guys who have gone in and out of the SSPX like a revolving door.  I've know great defenders of the faith, who condemned every misstep of the clergy and the bishops, even going so far as to attribute to themselves the Pauline boast "I opposed [Peter] to his face" - who have fallen away.
Most of the people of whom I speak have fallen away.  Some went to Protestant churches, some went to the SSPX or another Catholic break-away group.  A couple went to the Orthodox, and some simply returned to the vomit of paganism and their former way of life.  At some point in their zeal, they likely scandalized ordinary, faithful, Catholic believers, as well as those just beginning to believe.  Then their 'lights' went out.  Like foolish virgins they went to get more oil, and never came back.
Be careful.
We ALL have to be careful!  As St. Paul cautioned:  If you think you are standing strong, be careful not to fall. [1 Cor. 10:12]  We can not only scandalize others and drive them away, or cause them to join in our negative criticism with their own snark, we can even fall away ourselves.  We need to examine ourselves ... every day.

Have my words, actively or passively put down God, the Church or people?   Have I inflicted wounds on the Body of Christ by showing disrespect, dissent or disdain?  Have I mocked online the leadership of the Church—whether it’s my pope, my bishop or my pastor? - Deacon Kandra, Examination of Conscience

Email ThisBlogThis!Share to TwitterShare to FacebookShare to Pinterest
Labels: duck and cover, Even the elect, Pope Francis, pride and arrogance, who would have ever thought this would happen?