It's good to know men are still talking about it... 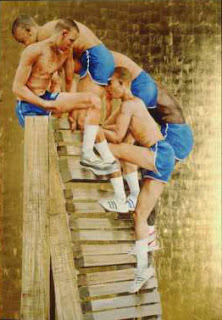 I've been silenced, but other men will keep coming forward to tell the truth about homosexuality.

How have I been silenced, you ask?  It's self imposed - more or less.  I have homosexual friends who have objected, oftentimes vigorously, sometimes with great hostility, other times sorrowfully, that I cease and desist writing about the evils of homosexuality.  I've been blogging for so long that I have developed a 'better' understanding of the complexities of gay life, and a much more compassionate regard.  I've learned that gay people think of themselves as a species unto themselves, and within that category, each person can be a special species, with peculiarities all his own.  I'm not even being facetious when I say that.

However, it explains why I tend to reject the theory that gay culture is something monolithic, or that it is an organized movement similar to a political machine.  Gay lobby?  More like gay lobbies.  I may be naïve in that regard, but in my experience it seem closer to the truth to describe it as a social 'milieu' more or less comprised of disparate cliques and factions if you will.  As one might expect, there is a sense of unity as regards certain issues, such as ENDA, but not even same sex marriage succeeds in achieving consensus.  Nevertheless, one must admit there is a homosexual movement.  If we can say there is a feminist movement, a women's movement, certainly it is reasonable to identify a 'homosexualist' movement.

But you don't want 'me' to say anything.

Recently two friends were married.  I've known the men for several years.  As gay marriage loomed on the horizon for Minnesota, I asked them if they intended to marry.  Their first reply was no.  As the issue advanced in the polls, they then said they would consider it, if it was financially beneficial to them.  In the end they decided to 'tie the knot'.  One of the men is retired and the other continues to work, in fact, he provided same-sex benefits from his employer - which included health insurance.  When gay marriage was legalized in Minnesota, the company decided to rescind same sex benefits and required couples to get married in order to retain that benefit.  (I think I got that right.)  Anyway, my friends decided to get married - it was their choice.

I would have said they 'had to get married' just as a joke of course, but they suddenly took it all very seriously - even solemnly.  I was invited, but I didn't attend.  I rarely go to weddings anyway, so it wasn't an issue - in my mind.  I respected their sentiment, though I am against same sex marriage.  I know they know exactly what I believe, and after nearly a month, nothing has been said.  I would never mock these men, nor do I need to 'preach' to them.  They have been upset with my beliefs and things I've said about the 'gay lifestyle' so many times in the past, I have no interest in reenacting that drama again.  They know, I know that they know; I know they know.

So there.  Self imposed silence - kind of.

That said, I began this post to bring to your attention a guy who has written extensively on The Truth About the Homosexual Rights Movement.  His name is Ronald G. Lee.  He has written a very long essay - perhaps summing up a lot of what I've blogged about for the past seven years.  My writing is often flippant - Mr. Lee's is rather more intelligent.  His  'witness' is very good because it is based upon experience, extending back in time a couple of decades.  That is important, because many people have been educated to accept a sort of domestic homosexual lifestyle - an Ozzie and Harry style of gay family bliss.  I'm also happy Lee speaks about ex-Father John McNeill's 1976 "classic" The Church and the Homosexual - it influenced a great many, leading many more astray.  I'll post a couple of excerpts from the essay here:


Several years ago, McNeill published an autobiography. In it, he makes no bones about his experiences as a sexually active Catholic priest -- a promiscuous, sexually active, homosexual Catholic priest. He writes in an almost nostalgic fashion about his time spent hunting for sex in bars. Although he eventually did find a stable partner (while he was still a priest), he never apologizes for his years of promiscuity, or even so much as alludes to the disparity between his own life and the passage in The Church and the Homosexual that meant so much to me. It is possible that he doesn't even remember suggesting that homosexuals were supposed to remain celibate until finding monogamous relationships. It is obvious that he never meant that passage to be taken seriously, except by those who would never do more than look in the window -- in others words, gullible, well-meaning, non-homosexual Catholics, preferably those in positions of authority. Or, equally naïve and gullible young men such as me who were looking for a reason to act on their sexual desires, preferably one that did not do too much violence to their consciences, at least not at first. The latter, the writer presumed, would eventually find their way back to the porn section, where their complicity in the scam would render them indistinguishable from the rest of the regular customers. Clearly, there was a reason that in the earlier book he wrote so little about the real lives of real homosexuals, such as himself.


I don't see how the contradiction between The Church and the Homosexual and the autobiography could be accidental. Why would McNeill pretend to believe that homosexuals should restrict themselves to sex within the context of monogamous relationships when his life demonstrates that he did not? I can think of only one reason. Because he knew that if he told the truth, his cause would be dead in the water. Although to this day McNeill, like all gay Christian propagandists, avoids the subject of sexual ethics as if it were some sort of plague, his life makes his real beliefs clear. He believes in unrestricted sexual freedom. He believes that men and women should have the right to couple, with whomever they want, whenever they want, however they want, and as often as they want. He would probably add some sort of meaningless bromide about no one getting hurt and both parties being treated with respect, but anyone familiar with the snake pit of modern sexual culture (both heterosexual and homosexual) will know how seriously to take that. And he knew perfectly well that if he were honest about his real aims, there would be no Dignity, there would be no gay Christian movement, at least not one with a snowball's chance in Hell of succeeding. That would be like getting rid of the books and letting the casual window-shoppers see the porn. And we can't have that now, can we? In other words, the ex-Fr. McNeill is a bad priest and a con man. And given the often lethal consequences of engaging in homosexual sex, a con man with blood on his hands.


Let me be clear. I believe that McNeill's real beliefs, as deduced from his actual behavior, and distinguished from the arguments he puts forward for the benefit of the naïve and gullible, represent the real aims and objectives of the homosexual rights movement. They are the porn that the books are meant to conceal. In other words, if you support what is now described in euphemistic terms as "the blessing of same-sex unions," in practice you are supporting the abolition of the entire Christian sexual ethic, and its substitution with an unrestricted, laissez faire, free sexual market. - Truth About Homosexual Rights Movement


One more thing, as I said the other day, I regard same sex marriage as an act of apostasy.

Email ThisBlogThis!Share to TwitterShare to FacebookShare to Pinterest
Labels: gay got back, homosexual rights movement