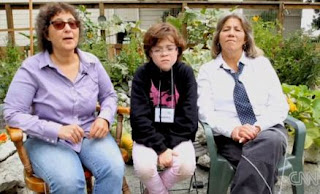 No, no, no...
.
Every time I try to be fair and think positively - a story like this comes along:


A lesbian actress who starred in "The L-Word" said she kissed a girl -- and got escorted off of a Southwest Airlines flight on Monday for doing it.
Leisha Hailey took to Twitter to call for a boycott of the carrier after a flight attendant told them other passengers had complained after witnessing the affection.
Her first tweet said: "I have been discriminated against." She later added, "Since when is showing affection to someone you love illegal?"
Southwest Airlines Co. responded on its website that Hailey was approached "based solely on behavior and not gender." The airline's four-sentence response said passengers were characterizing the behavior as excessive.
A discussion followed on the flight, and the airline said it "escalated to a level that was better resolved on the ground." - Source

So.  That is going too far - in my opinion.  Other passengers do not have to be subjected to that - same sex on same sex, or opposite sex on opposite sex.  Get a room.
.
Did I mention I'm against gay marriage and adoption?
.
So, then, a story like this comes along about bad parenting.

The lesbian parents of an 11-year-old boy who is undergoing the process of becoming a girl last night defended the decision, claiming it was better for a child to have a sex change when young.
.
Thomas Lobel, who now calls himself Tammy, is undergoing controversial hormone blocking treatment in Berkeley, California to stop him going through puberty as a boy. - Source

To be fair...
.
So anyway.  Indeed there are heterosexual married couples who have decided to raise genderless kids or who have opted for hormone therapy for their kids who think they are the opposite sex - they are just as bad.  Perhaps there are Therian parents who will let their kids be a cat if they think they are a cat - they are nuts too.  Bad parents are all around us - I know - I grew up with two.  People - you are abusing your kids.


Some, in their desire for children do so 'upsetting and troubling the whole world in their longing for them.  For they do not know whether the children will be good and serve God, or whether the expected happiness will be rather sorrow, or the rest and comfort, trial and grief, or the honor, dishonor.  And because of the children, they might, as many do, offend God more.  Christ says of these people that they circle the earth and the sea to enrich their children, and they make of them children of perdition twofold more than they themselves are.' [Mt 23:15] - John of the Cross, Ascent, Bk III, Chp 18:4

"Sin does not remain in the solitary cell of the individual conscience, but swiftly spreads to become a community of error and fate." - Romano Guardini
.
Photo:  Lesbian couple with transgender son Tammy.
Posted by Terry Nelson at 11:45 AM

Email ThisBlogThis!Share to TwitterShare to FacebookShare to Pinterest
Labels: I'm against it