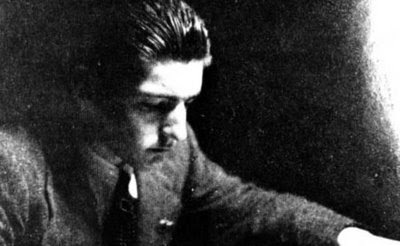 A single layman.
.
Blessed Alberto Marvelli, known in life as an engineer and charitable worker, lived from 1918 to 1946 in the diocese of Rimini, Italy. Like his mentor, Blessed Pier Giorgio Frassati, Alberto lived a short life, dying at the age of 28.
.
His spirituality, completely free of exaggeration, was perfectly integrated with his daily duties and obligations. His charity reflected that of the good Samaritan, pointed out by our Lord in the Gospel. Alberto dedicated himself to the apostolate sharing in the work of the St. Vincent de Paul Society. Especially during and after the war, Alberto was at the service of the poor and suffering.
.
In his youth Alberto was friends with the famous film maker, Frederico Fellini.  Shortly after his beatification, I looked with renewed interest at  a couple of my favorite Fellini films and noted how the director frequently relied upon Catholic devotion and practice to tell his stories.  As a recent commentary by Dr. David A. King suggests, Fellini's Catholicism was deeply woven into his work: Fellini’s ‘La Strada’ Emphasizes Catholic Truths.  I wonder if Blessed Alberto would have lived if the two would have remained friends?  I rather think so, despite the fact sections of Fellini's work were more or less 'indexed' by Vatican censors at the time.
.
Bl. Alberto's spiritual friends included St. Gemma Galgani, for whom he had a tender devotion and drew inspiration for his deep love of the passion of Christ. He also had an ardent Eucharistic piety. His communions seemed to enrapture his soul and kept him joined to Jesus for a long time in thanksgiving.
.
Marvelli kept a diary since the age of 15 which reveals many details about his life. In one entry he wrote, "What a great deal of work is needed in this world which is so far from Christ; it is necessary for us to offer sacrifices; we must act to the utmost of our strength to make Christ known and loved. It is the call of duty we are urged by, and we are obliged to realize it."
.
Bl. Alberto prayed for the grace to be able to practice acts of mercy:  “Jesus give me a bit of Thy infinite love for men and their miseries, of Thy endless and supernatural ardour of apostolate”.
.
Alberto was killed on October 5, 1946 after being hit by a truck while on his way to the aid of a poor family.
.
Link: Beato Alberto Marvelli, Diocesi di Rimini
Posted by Terry Nelson at 12:05 AM