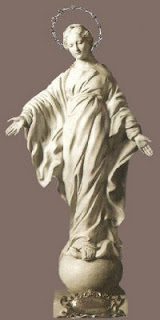 While at the table of sinners...
.
One must practice discretion.  St. Therese of the Child Jesus regretted speaking about her vision of the Blessed Virgin after she had been cured by Our Lady of the Smile at the age of eight.  Yet she learned from such experiences, which in turn influenced her little way of confidence and love:  "It is to recognize our nothingness, to expect everything from God as a little child expects everything from its father; it is to be disquieted about nothing, and not to be set on gaming our living. ... To be little is not attributing to oneself the virtues that one practices. ... It is not to become discouraged over one's faults, for children fall often, but they are too little to hurt themselves very much."
.
As a nun, Therese and her community had been deceived by the conversion story of Diana Vaughan, an impostor whose true persona was the anti-Catholic con-artist Leo Taxil...  The realization of which led to Therese writing in her memoirs, "I was unable to believe there were really impious people who had no faith... [but] Jesus made me feel that there were really souls who have no faith, and who, through the abuse of grace, lost this precious treasure, the source of the only real and pure joy."
.
Sometimes little children are so trusting and anxious for the good of others, they forget themselves and commit innocent indiscretions, perhaps even giving that which is holy to people not ready to receive.  Thus it ought not to surprise us when our best intentions get trampled underfoot.  [Matt 7:6]
.
Nevertheless, one should never be discouraged, since it is all included in the price of dining at the table of sinners.
.


"Never allow yourself to pour out your heart, even though it be but for the space of a creed." - St. John of the Cross, Maxims

Email ThisBlogThis!Share to TwitterShare to FacebookShare to Pinterest
Labels: confidence and love