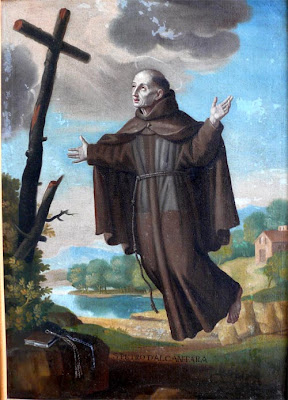 Religious art.
.
Isn't this a nice image of Peter of Alcantara?  I didn't paint it, although I have been painting people and things levitating, not as well as Cynthia Large of course, but I did take my inspiration from her.  I haven't published any of my paintings from this past winter because they aren't very good and I haven't had ideal conditions in which to photograph them anyway - conditions such as taking the time to set up the tripod.
.
Anyway.  I'm still painting however.  I'll try to post a couple of the more recent, decent paintings for your amusement in a day or so on "Up Your Street".
.
Fr. Eric has a good post on Portraying Our Lord in Art.  Not surprisingly, Father dislikes images such as the Godspell Jesus - he hates clowns - and ethnic Jesus - radical black Jesus with dreads and stuff like that.  I'm not fond of such images either - although many primitive indigenous images of devotion can be edifying - take Ethiopian/Coptic images, Southwest Spanish Colonial retablo, and some Asian and African images.  I get that stuff.  Nevertheless these images and those based upon such often remain foreign to ordinary Western taste.
.
That said, I believe images of Christ ought to move one to devotion if they are meant to be used liturgically or for private devotion.  While religious art is also instructive, politicized images of Christ have no place in religious cult or devotional practice.  I think some of the examples Fr. Eric refers to are politicized and/or sentimentalized and may be better defined as kitsch.
.
Personally I prefer images of Christ based upon the Shroud image.  It seems likely most Christian painters have historically based their representations of Christ on that prototype.  Since the earliest times pretty much all the icons in both the East and the West can be traced back to the image of the Holy Face on the Shroud or the Veil of Veronica.  Hair color and eye color may vary - but that is of little significance, although it can convey a supernatural meaning - light skinned, light hair, blue eyes have often been esteemed by all cultures and sometimes serve to communicate a mystical quality.  This does not discount the fact there are red haired Jews, sun-bleached haired Jews, Jews with blue eyes, green eyes, brown eyes, and so on.  Jesus was a Jew, but all Jews do not look alike.  Naturally, there must have been an attractiveness about Our Lord, despite the fact Isaiah says "he had nothing to attract us to him" - of course the prophet is speaking of the Suffering Servant, disfigured by torture.  Jesus could have looked like Osama Bin Laden for all we know.
.
However, as the Easter narratives reveal, the Lord's look seems to have changed after the Resurrection - the Gospels tell us the disciples didn't recognize him at first.  It seems he may have looked differently each time he appeared to them.  Aside from the supernatural significance, what does that mean on the natural level?  Does it perhaps allow for some freedom in depicting Our Lord in the arts?  I think it may - within reason of course.  Yet as I said, sacred images should lead one to devotion.  In almost every appearance by the risen Christ to his disciples, Jesus somehow revealed himself sacramentally - in the breaking of the bread - the Eucharist, the episode on the shore with the fish, the upper room breathing the Holy Spirit upon the disciples and so on.  The images of Christ, the saints and episodes from the Gospel ought to inspire and instruct and draw the viewer into deeper communion with the divine reality they represent.  Sometimes that is done in the vernacular of the artist and his particular culture.
.

Email ThisBlogThis!Share to TwitterShare to FacebookShare to Pinterest
Labels: Art and spirituality