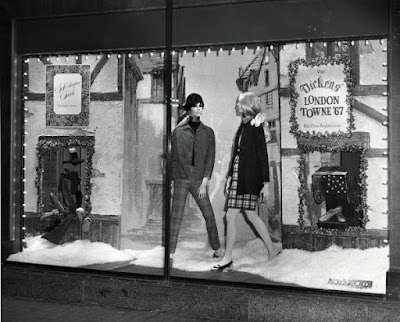 This year I really will be going to my sister's for Thanksgiving.
Being alone for the holidays was never a big deal for me, and here is why.
My reputation for hating the holidays was not true. My withdrawal at from social affairs over Thanksgiving and Christmastime was a result of my work at Dayton’s and had nothing to do with the family or hating the season. For weeks leading up to Thanksgiving, it was constant work getting store interiors and windows done for Christmas – lots of overtime and some all-nighters - the night before Thanksgiving could be a nightmare. Animated windows, synched with the auditorium could make things miserable - it was like a Broadway opening. (Darold did the same work, when we first met he never liked Christmas because of it.)
Thanksgiving was a day to sleep-in since we often worked all night. Likewise in Senior year, my 1st Christmas was watchman for animated windows and getting backgrounds for Spring done. I worked until Midnight through Christmas.
Later, after entering the monastery, Christmas became a more spiritual, solitary event. Then when I worked at the Cancer Home, I worked weekends and holidays so people with families could have those days off – for nearly 16 years. Mid-week I did my artwork. Long story short, not being around was never about avoiding family or a rejection of family. To be sure, sometimes I avoided my parents on the holidays because they were trouble makers – but they never caused me to hate Christmas.
Together, Darold and I reinvented our holiday observance. It began on S. Nicholas Eve and went through Christmas, Russian Christmas and 12th Night. His mom and dad were our 'immediate family' and they loved all the celebration and food and being together. It was magical and unrepeatable.
This year I'm grateful to spend Thanksgiving with my sister and her awesome family, and Christmas with my little brother.
Happy Thanksgiving - and remember those who serve and protect.
Posted by Terry Nelson at 10:49 AM