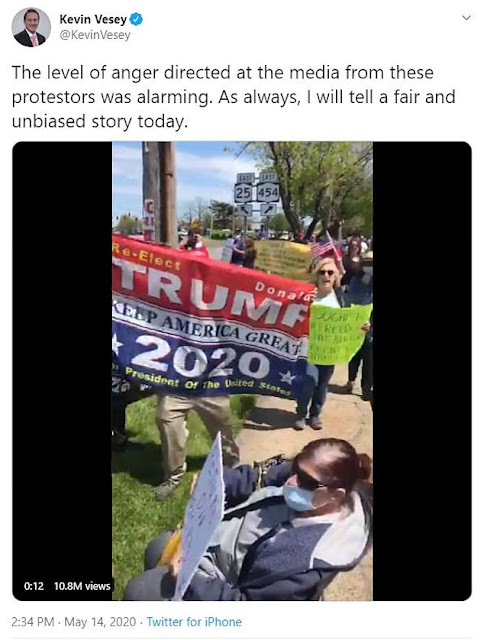 THE ENEMY OF THE PEOPLE. Sadly, our Lamestream Media is TOTALLY CORRUPT! - Trump tweet

I'm sure everyone has seen reports on this story - the lockdown protests.  Some of the behavior exhibited by protesters, has been threatening and intimidating.  In Michigan some have shown up with guns and militia gear.  In Minnesota the Governor's residence was littered today.  President Trump calls them 'good people' and no doubt some of them are.  Yet he praises the worst behavior and stirs up more anger, dismissing journalists he sees as reporting 'fake news' as 'not essential.'  Trump admits on Twitter that his supporters, especially the 'orange shirts'  online, are his best campaign people.  (Wish I had the actual tweet.)  They are free and they are being used by Trump.

He thrives on social media propaganda - that's clearly his strategy - he stirs up his supporters.  He publishes numerous tweets per day, using inflammatory language similar to right-wing, radio talk-how hosts.  He tries to silence MSM and replace it with unverifiable claims on social media, supported by his base, who organize on social media.  Fox and friends is his network.  Nothing new, I know.  I also know it's free speech.  But social media is his machine, and he is using people he would otherwise despise.  As Howard Stern affirmed, “The people Trump despises most, love him the most.”


Stern went on to say that Trump would be “disgusted” by the MAGA crew. “Go to Mar-a-Lago, see if there is any people who look like you,” he said. “I’m talking to you in the audience.” - Source

(My apologies to friends and others of good will, who support Trump.)
Posted by Terry Nelson at 5:55 PM