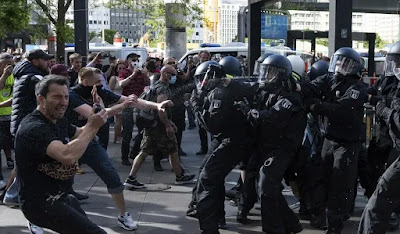 “Nonsense is nonsense but the history of nonsense is scholarship.” - Saul Lieberman*


In an Atlantic piece, The Conspiracy Theorists Are Winning, by Jeffrey Goldberg, the author explores the growing influence of conspiracy theories in American politics.  Goldberg writes:


I had spent years in the Middle East listening to complicated nonsense, and I was familiar with the long and dismal history of Russian conspiracy-mongering. It was always a relief to know that in the United States, conspiracism was usually—not always, but usually—a marginal phenomenon. Men like Alex Jones were more often than not a source of bemusement, not a cause for fear. Healthy societies develop antibodies to protect themselves from fantastical thinking, and America, democratic, free, and transparent, was a healthy society. I was wrong, of course. - Goldberg

I've been running into more and more young people - at the store and elsewhere, who are convinced MSM does nothing but fake news. They place their trust in Trump and what the White House tells the country. I have started to wonder if the disinformation campaign coming from the White House is a deliberate propaganda machine, as was that operated by Goebbels in Nazi Germany? Trump loves conspiracy theories, as Goldberg notes:


"Trump does not defend our democracy from the ruinous consequences of conspiracy thinking. Instead, he embraces such thinking. A conspiracy theory—birtherism—was his pathway to power, and, in office, he warns of the threat of the “deep state” with the ferocity of a QAnon disciple. He has even begun to question the official coronavirus death toll, which he sees as evidence of a dark plot against him. How is he different from Alex Jones, from the conspiracy manufacturers of Russia and the Middle East?

He lives in the White House. That is one main difference." - Goldberg

At the risk of sounding like a conspiracy theorist myself ... For a longtime now, I've attributed the blame-game played by the administration, pretty much to Trump alone, with some help from his staff of course. It just seemed like ordinary dissimulation tactics - political double-speak. Until now. It strikes me as a deliberate strategy - and not just dumb mistakes. I hate giving Trump credit for intelligence - but there seems to be a growing, recognizable effect happening across the country. After Kushner's remark a few days ago about pushing back the election, I wouldn't be surprised if the the administration attempts to do just that.

Trump does not defend our democracy from the ruinous consequences of conspiracy thinking. Instead, he embraces such thinking. - Godlberg

My apologies to my Catholic friends who support Trump, but the "consequences of conspiracy thinking" is indeed ruinous. Catholics need to be aware of this more than anyone else, since many can find themselves influenced by Catholic private revelation and 'locutions from heaven'. Many times private revelation, and or the interpretation of the message, goes hand in hand with conspiracy theories.

The apparition circuit has often acted as a sort of conduit for conspiracy theories. Especially today, with the opposition to Pope Francis and the Ordinary Form of Mass, not to mention the recent letter from Archbishop Vigano. Vigano and his followers are pointing the finger at a left-wing, Socialist, Masonic conspiracy aimed at a Global takeover - a New World Order. They frequently refer to OL of Fatima to defend their position, suggesting previous Popes ignored Our Lady's directives. In doing so, they risk making themselves cooperators in the right-wing populist movement. 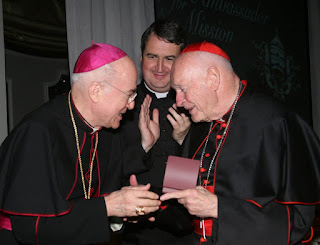 *The Lieberman quote is taken from Goldberg's article.  I find it especially interesting in reference to some of the Catholic conspiratorial thinking.  Even scholars can sometimes convey an impression of acceptance of the intentions of the purveyor of misinformation, while attempting to refute the more fantastical interpretations of an event, or message.
Posted by Terry Nelson at 3:48 PM

Email ThisBlogThis!Share to TwitterShare to FacebookShare to Pinterest
Labels: Conspiracy theories in time of pandemic