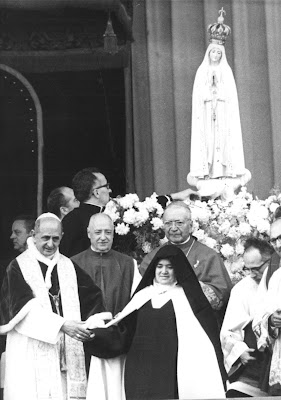 Why people consider it passe.

I had a discussion with a friend who has never been attracted to Fatima and the devotion.  He has a ton of questions - which comprise his objections, more or less.  I like skeptics and academics who are also devout Catholics.  No one is obliged to believe private revelations, even though several Popes have endorsed Fatima, and the prophecies and miracle have been validated.  Fatima has its share of eccentrics, and due to all the bad interpretations of the secrets and message, the authentic message is eclipsed and ignored.  My friend asked why the devotion is still credible?

I responded that it is credible - but the extreme side has exaggerated the message and distorted the secret, while they sensationalized the warnings from the Blessed Virgin. Essentially the message of Fatima is similar to that of the revelations to S. Margaret Mary and the request for the King of France to consecrate the nation. He did, but it was late, which led to secularization - I simplified the narrative.

Our Lord appeared to Lucia telling her how important the consecration to the IHM was to him and for the peace of the world - which has been entrusted to the Virgin. He told her the consecration will take place, but it will be late - citing the French failure. Over the decades, esp. approaching 1960, many Catholics were anxious for the Holy Father to reveal the 3rd part of the secret.  This apparently was even more important for them than the request for 1st Saturday devotion and the consecration to  Russia. Of course, Pius XII did so in a round about way, but it wasn't in union with all the bishops, etc..

As we know, JPII did it, and only much later revealed the 3rd part of the secret.  The JPII consecration was as OL asked, collegial, including a sort in pectore reference to Russia.  Sr. Lucia said it was done and accepted by heaven, albeit late.  Obviously the errors of Russia had meanwhile spread and we have seen the effects of that, albeit nuclear war was avoided.

Nevertheless, these people continue to claim the consecration wasn't done, or at least not accomplished exactly as OL requested - in this, they have veered off track.  In reference to an earlier post on Frere Michel's early work, I continued:

I had no idea how far Frere Michel's position Fatima (the secret and consecration, etc.) had evolved nor his association with Gruner.  The Gruner position is that the Virgin warned of a bad council, the Novus Ordo, and bad popes. Lucia never, ever said anything about that. She participated in the NO Mass and sacramental life.

Long story short, the bare bones of Fatima is credible - substantiated by every Pope since Pius XII, verified by Sr. Lucia herself, as well as a stunning miracle, several prophecies fulfilled, resulting in numerous conversions and so on. Because the effects of the 'errors of Russia' are still at play, the world remains in conflict. However, extrapolating the pandemic and antivax theories as part of the message is a stretch.   I seriously think Cardinal Burke has been misled by all the right wing propaganda - including QAnon crap.  The misinformation just can't be flushed out of the culture, or strands of popular-piety at this time.   Anyway - these people have done more harm to the Church and the devotion by their conspiracy theories, which in many instances have been actual lies, repeated so often, they are no longer differentiated from the original narrative.

Cardinal Burke ... the Coronavirus as chastisement.

To my amazement, later in the day I received an alert,  LifeSite published a talk by John Henry Westen, going even further than Cardinal Burke's address Wednesday, using Fatima to discredit Pope Francis.  An excerpt:

Thursday, May 21, 2020 (LifeSiteNews) – In these times of Coronavirus it has become for me clear that we are living in the end times, at least as that pertains to the chastisement predicted by Our Lady of Fatima in 1917. Today the greatest deprivation of all time has taken place. For the first time in history the greater part of Catholic humanity has been deprived of the Holy Sacrifice of the Mass.

[...] In these times, the confusion is most grave as it is comes from the Pope himself who is supposed to be the chief guardian of the truths of the faith. Pope Francis has caused dreadful confusion with public statements to the press distorting Church teaching about contraception, cohabitation, homosexuality and transgenderism.

[...] It is worth noting that just before this virus broke out, the Pope allowed for idolatry in the Vatican Gardens. The Pachamama idolatry that took place there also included prostration before a statue of the Pachamama. The statue was later processed into St. Peter’s Basilica where the Pope and several Cardinals said prayers before it. This act was condemned by many Cardinals, bishops, priests, and laity all over the world. - Westen


LifeSite, Westen, Burke, Vigano and Schneider are acting as a parallel Magisterium.  The Rome Life Forum is not a synod - they are not in charge.  In fact they are leading a movement in opposition to the Pope.  It's unbelievable.  Westen clams the greater part of humanity has been deprived of Mass.  Later he concedes Mass is continued to be celebrated, but compares it to how priests would function under extreme persecution.  So many claims and subsequent links to Fatima are a misrepresentation of fact, based upon hybrid private revelations and subjective interpretations.

Fatima, Anticommunism and McCarthyism were linked in the popular consciousness of the 1950's.  Unfortunately, the Fatima movement has often been used for ideological and political purposes.

I leave it here for now.

Email ThisBlogThis!Share to TwitterShare to FacebookShare to Pinterest
Labels: Burke's law, Fatima in time of pandemic