Holy Thursday, in time of pandemic. 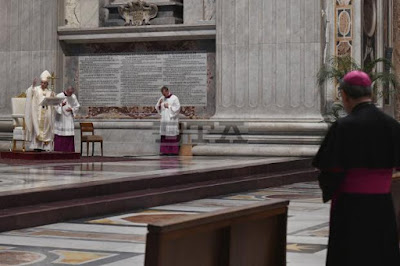 Mystics are prophesying like crazy - one, Mark Mallet, is laying out how this fits in with the Antichrist - e.g. self-isolation, the interruption of public Masses, and so on.  Medjugorje cease-apparitions and assorted prophecies from seers all seem to add up to an abrupt change to a New World Order, as forseen my Gorbachav and Kissinger and other Commie-Free Mason elites.   That's a quick summary of more than just Mallet's prophecies - but not far off.  I think Mallet supports Pope Francis - so that's good.  Those who don't, claim Francis is in cahouts with the New World Order set up...

Although these prophecies, which are often favored by many Trump supporters, (in whose eyes he can do no wrong, even if he has some financial interests in unproven medications to cure COVID-19, among other issues), adds to the sense of hysteria/insanity online.  Hard to follow some of these people.  For instance, I have heard it for a long time now, Trump is chosen by God.  The pro-Israel Christians identify him as a modern King Cyrus - some even compare him to Nebuchadnezzar.  Look up these Biblical figures for yourself, then you will see why they do - strictly from their POV, that is.  Of course this means the Pope and the Bishops are all playing sides with the Antichrist, hastening his appearance.

All this hysteria because of a pandemic, which was pretty much expected by science and medicine anyway, for which the Administration was not only unprepared, but cut funding for a program which would have prepeared for such a crisis.  Though warned of the potential pandemic just a couple of moths ago, the Administration and those who support Trump decried the growing pandemic as a hoax.  What a crock.

An invitation to repentance.

Repent from idolatry in all its forms - echoing the scriptures, avoid greed in all its forms.  Indeed there is a fierce spiritual combat going on - but we are not orphans, Christ has not abondoned His Church... by baptism, we are his temple.

It seems to me that the limiting of the active participation of the faithful in the liturgical celebrations of Holy Week and Easter is a grace.  For decades, not a few ultra-traditionalists decried the reforms to the Triduum instituted by Pius XII, John XXIII, and later, the entire revision of the liturgy according to the Missal of Paul VI.  More recently, traditionalists have played the 1960 ritual against the Ordinary Form.  Some radicals even suggesting the Ordinary Form is evil.  Now, our access to both has been interupted.  (Radicals claim 'suppressed' - that's not the case, though it suits their apocalypse narratives.)

Others, who receive communion on the tongue, not in the hand, said they would forego communion if they had to receive in the hand, not to mention those who would miss Mass if they couldn't attend the extraordinary form.  Despite all of these fights and the cries to heaven over liturgical discipline and rituale, continues unabated between the most devout.  While most of us are asked to stay home from Mass to help quell the contagion, and do so, observing Lent and Holy Week as devoutly as we can, these same people are calling out the bishops and the pope for their submission to the State - preparing the world for the Antichrist - New World Order, One Global Government.  It is illogical.  It is a different faith based upon spurious private revelations and speculation, sometimes even attributed to the Popes.  If you delve long enough into their conspiracy theories, they can even begin to make sense - which is how these cults entrap so many people of good will.  Be careful.

Having said all of that, I really do see this time as a time of grace, to go deeper in prayer and meditation, to spend time in that spirital communion that leads to acquiring the grace of habitual recollection and union with God.  It is a time wherein we cannot be ravished by liturgical performance, yet we remain free to enter into the Sacred Triduum with more sobriety and authentic devotion. I can't help but remember those faithful in concentration camps, deprived of access to the sacraments, yet their faith flourished.

I see the Church as a field hospital after battle. - P. Francis

This poverty of spirit helps us to appreciate and stand in awe before the nakedness of Jesus crucified.  I have been so deeply impressed by the fact that he is the Lamb of God, the sacrificial lamb, our atonement for sin.  It's beyond awesome, this thought.  'Sometimes it causes me to tremble' as the hymn says.  God is greater than the sacraments - Jesus crucified - the one sacrifice eternally present before the Father.  Nothing can separate us from the Love of God that is ours through the blood of His Son.  If we claim our rights based upon forms and rituals, if our faith is in our rights, rights we have the audacity to claim we deserve - and not in the will of the Father, who gave his only begotten Son - what is our faith?

If we need to tout cliches claiming we are 'Easter People', we need very much to confess that we are first of all People of the Cross.  Many, deprived of their crosses and churches, sacraments and liturgical rites have died for the faith.  We haven't been persecuted yet, we haven't had churches blown up - we are simply asked to stay home.  We continue to have access to the sacraments, and we can assist at Mass on television.  Our religious freedom has not been denied.

Therefore, since we are surrounded by so great a cloud of witnesses, let us rid ourselves of every burden and sin that clings to us and persevere in running the race that lies before us while keeping our eyes fixed on Jesus, the leader and perfecter of faith. For the sake of the joy that lay before him he endured the cross, despising its shame, and has taken his seat at the right of the throne of God.3Consider how he endured such opposition from sinners, in order that you may not grow weary and lose heart.4In your struggle against sin you have not yet resisted to the point of shedding blood. - Hebrews 12