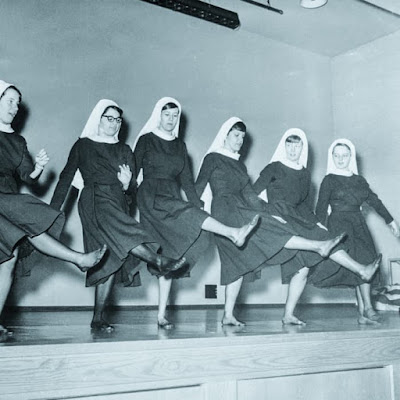 I'm not sure what these sisters were doing, but the photo is from around the time nuns began modifying their habits - 1967.  The strange photo which I found here, Studs Terkel - Radio Archive, documents the sisters in a line dance.  It's so ironic, considering how the essence of religious vocation was a call to leave the world to follow Christ.  Today the number of members of these orders have diminished.  In many cases, they've completely reconstituted to secular life.  That's not to say religious in secular dress are any less religious for that, yet one can't ignore the collapse of religious life in certain congregations.  I know readers know that.

Interestingly, one of the top interviews on this page is with Father James Kavanaugh, discussing his book, A Modern Priest Looks His Outdated Church.  Kavanaugh lived to see the Church update itself - to its current crisis mode - he died in 2010.  He left the priesthood shortly after the publication of his book, and was twice divorced.  His celebrity, which got him on late night talk shows, was more or less short lived.  An obituary here. 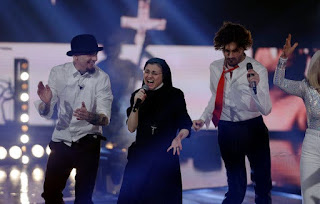 Of course, the habit doesn't make the nun.

Email ThisBlogThis!Share to TwitterShare to FacebookShare to Pinterest
Labels: There is great gain in religion