A Couple of Thoughts On Mother Angelica - before she's canonized. 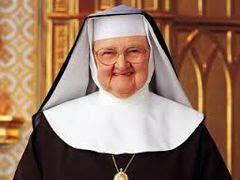 I loved Mother Angelica because she was so normal - down to earth, and ordinary.  No doubt she did extraordinary things.

While she is being piously eulogized, I've been searching online for some of her more off-beat quotes, and can't find them.  As we go forward, I suspect many things she said or did will be sanitized of anything that could be considered unedifying.  I might be wrong - but I think she was a lot like Pope Francis with her off the cuff remarks and snap 'judgments'.

Her locking horns with Cardinal Mahony and Bishop Foley is legendary and well known, and I'm sure it will be discussed online.  I think it was the encounter with Foley that incited M. Angelica to say on the air, if I remember correctly, that she'd rather "blow up the studio than let it get into the hands of the bishops!"  I love her for that.

I also remember one night after reading questions from the audience, she responded to a person who said someone they knew didn't believe in hell, she replied, "he will when he gets there!"

Another time, deeply disturbed by the Scorsese film, "The Last Temptation of Christ", she said she hoped God would punish Hollywood for the blasphemy, even maybe with a great quake and letting it be swallowed up by the sea.

As Arroyo always says - she was feisty.

She had a rough and tough childhood. Some of the stories she told sounded a lot like my experiences.  The school sisters weren't that nice to her, she moved a lot, hung out in her uncle's? bar.  She was without guile.  She often cracked me up with her quips and straightforward opinions.

I'm convinced she was the perfect foundress-prioress for an enclosed community - perhaps like Teresa of Avila to some degree.  I also admire her for taking care of her mother in the monastery - I think her mom may have had a difficult personality.

Early on, Mother's Apostolate was an important influence among Charismatic Catholics.  I'm convinced it was she who evangelized them with devotion to the Blessed Virgin, the rosary, and the Eucharist.  Her pamphlets were widely distributed among Charismatics, providing solid catechesis on Catholic doctrine, which otherwise could be watered down and 'protestantized' within the very fluid Charismatic movement.

This morning I'm thinking of her in heaven, completely dumbstruck and in awe, caught up in the beatific vision.