The Caleb Laieski story and the age of consent... was it rape or love? 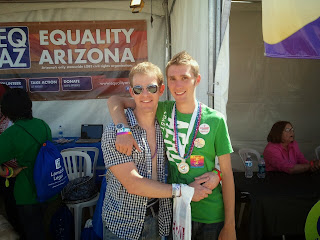 
Caleb Laieski, a high school student who was bullied, followed home and threatened for being gay...

Conservative blogs have made a very big deal out of the Caleb Laieski story.  President Obama honored the young gay activist just last week at a dinner in the White House.*  Conservative bloggers went nuts with the story because Laieski is accused of sex crimes involving a much younger boy.  It's a complicated, if not bizarre case - evidently ignored by the Administration intent upon promoting ant-bullying activism, and some would say, gay rights.  Confused?  Of course you are.

In the remote chance you haven't heard about this story in MSM (sarcasm intended) I will brief you on it.  For convenience I take it from LifeSiteNews - I know many of my readers hate that site - but I did my homework and checked and rechecked all the sources, and as is to be expected - LifeSite got it right.


PHOENIX, November 20, 2013 (LifeSiteNews.com) – An openly homosexual teenager, who was given a position as an “adviser” to Phoenix Mayor Greg Stanton and honored by President Barack Obama at a White House “gay pride” dinner, has been indicted on more than a dozen counts of sexual misconduct with a minor under the age of 15.

Caleb Laieski, now 18, was 17 at the time of the alleged abuse. His alleged victim, a close friend he met on TrevorSpace (a social media site for children and young adults aged 13-24 who have an interest in homosexuality), was only 14 at the time. The younger boy said the sex was consensual, but that he felt “pressured” to participate. However, Arizona law says no one younger than 15 is capable of giving consent.

In an unusual twist, Laieski is also considered a victim in the case, since at least some of the charges stem from a three-way sexual encounter the boys had with 43-year-old Chris Wilson, an openly homosexual Phoenix police officer who was arrested more than a year ago and is now in jail awaiting trial for his role in the abuse of both children. Although Laieski was a minor at the time, his participation in sex acts with the younger boy violate state law, which says it is a crime for older minors to have sexual contact with children under the age of 15. - Finish reading here.


The reason this story interests me is because it involves - legally and technically - sexual abuse.  Homosexual abuse.  The youngest victim was 14 at the time.  The oldest perpetrator was 43 at the time.  The oldest perpetrator claims the 14 year old initiated it.  Anyone following this blog may recall Fr. Benedict Groeschel once said sometimes teen boys seduced the priests.  Bite your fingers now and don't jump on your keyboard to yell at me for reminding people of that.

Here's the deal.  The thing with homosexual/LGBTQ culture is that 'they' have strange rules, disappearing boundaries, and a very permissive moral compass.  When I've written on the subject of open relationships and open-marriages amongst gay men - friends get rather defensive and insist it is all about consent - mutual consent.  Evidently this consent issue applies here as well.  Caleb's boyfriend's mother gave her consent to her 14-year-old boy who gave his consent to have sex with a 17-year-old gay-anti-bullying activist who worked for the mayor of Phoenix.  Outside of the Ozarks and Muslim countries, whoever hears of child 'romantic hook-ups' like that?  Unless of course, it involved Michael Jackson and big money.

Where do you draw the line?  How do you tell who seduced who, or who was abused and who really wanted it?  How do you accuse a teen boy of rape when he had sex with a kid younger than himself?

See how screwed up this stuff gets?

In the end - it becomes an issue of consent - especially for those who are convinced homosexual behavior is not sinful.  Since it is not unlawful - between consenting adults - many no longer consider it sinful.  Perhaps the last taboo then is sex with underage minors.  If so, the age of consent needs to be lowered.  And that is on the 'agenda'... so watch out.

What to do about claims of sexual abuse?

I, along with many others, have exposed the wounds, the scars of sexual abuse, and the devastating effect it has had on our lives.  Don't people understand that it is a great betrayal of children to lower the age of consent?

I've written about this stuff before, but ...

The Caleb Laieski story demonstrates the adage, the more things change, the more they stay the same.  Gay life doesn't change - the same old - same old stuff goes on - despite my Beaver Cleaver friends in the suburbs domestic exceptions.  Remember Chris and Don - the love story of Christopher Isherwood and his partner, artist Don Bachardy?  Don was still a kid when they got together.  Similarly, I only just turned 18 when I moved in with a man thirteen years my senior.  I thought I was in love.  We were drunk nearly every night we lived together - 3 years.  He was promiscuous - I thought I was in love.  He seemed rich to me - he was my boss, but I was only interested in love - not even sex.  My coworkers thought of me as a climber and an opportunist - I seriously thought I was in love.  I was thrown into a real 'gay-lifestyle' - scared to death in a world of adult gay men, designers, decorators, artists, and so on - in retrospect I see I was sort of a trophy for my 'lover', I in turn clung to him for 'protection'.  It was not a good relationship by any means.  Oddly enough, my crazy mother went to see him once and told him to 'take care of my son'.  Kind of like the mother in 'Doubt', and the Laieski boyfriend's mother.

I don't want to go into details about sexual abuse of minors right now, but I do want to say that although younger people may be less naïve today, the element of abuse and exploitation still remains - even with so-called consent.  It seems to me that parents themselves must be terribly immature, which may be one explanation why they assume their kids are mature enough to make romantic and sexual choices for themselves - before they 'come of age', before they understand the consequences - long term consequences.

Having said all that, I think these situations betray a certain dishonesty amongst educators and gay activists who try to paint a picture of a gay lifestyle without sexual perverts.  How often have we heard that men having sex with boys is not a gay thing?


I am in no way saying all homosexuals are pederasts, or that men who have been molested turn out to be gay or end up molesting boys or girls. That is not the case. What I think the Laieski story demonstrates is that sexual predators who direct their attentions toward adolescent boys are indeed gay, or at least bisexual - which happens to be the 'B' in LGBT. Therefore, what happened to me, and others, including Laieski and his boyfriend was a homosexual problem. Homosexual activists are misinformed - or rather, misinforming the public.  I don't care what law enforcement or the court system labels it, or what psychologists call it, or even what a politically correct diocesan council calls it. Male on male sex is homosexual behavior.
As I've already stated, the only way to get around that is to lower the age of consent.  Don't let that happen to your kids.  (Ed. note:  What I mean by that is we need to resist social and political efforts to lower the age of consent.  By lowering the age of consent, the sexual abuse and exploitation of children and adolescents would potentially be decriminalized.  For instance, a 14-year-old boy might no longer be considered a victim of abuse, but a willing participant, who consented to the abuse.  Likewise, pretending that it's pedophilia and not homosexual when it involves teens and older males and adult men is a bizarre form of whitewash.)
To be continued ...
NB: I've written extensively on this subject, go here for some of those posts.  Thanks.
*As far as Obama conferring an award on this young man or any other person, such as he did with the Medal of Freedom Awards, it isn't my concern.  These are the actions of a very liberal secular Administration promoting and awarding a liberal agenda.  I have no control over what Obama does.