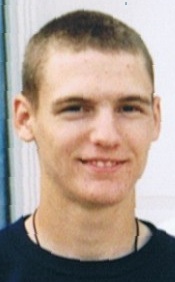 Charles Untz once wrote to one of his friends,
"Don't take God's mercy for granted
because death will come you when you least expect it,
so make sure you are as blameless as possible
when that time comes."*

Charles Anthony Francis Untz, killed by a driver who did not see him, right in front of his family's home, as Charles set out on his short walk to work.  Charles died that day, March 20, 1998 at the age of eighteen.


On his college application, Charles wrote, "I go to Eucharistic Adoration and Mass almost every morning before school. I think that this sets a better mood for the day. "
Charles enjoyed country living, the horses and other animals, and his job across the street at the turkey farm. He especially enjoyed his scouting experiences. He earned the rank of Eagle Scout on July 8, 1998. For his Eagle project he wrote an altar server handbook for Epiphany Catholic Church, Coon Rapids, MN, and directed the training of the new servers.
Before moving west, he and his family mowed the lawn, and shoveled and plowed the walks and parking lot of St. John Bosco Church, Stamford, VT. Charles also mowed the lawn at St. Francis of Assisi Church, North Adams, MA. Both projects were done as a volunteer.
Charles became an altar server when he was eight. He was the only server at the small parish of St. John Bosco, where he served for 5 years. His family transferred to St. Francis of Assisi where he served for two years. In 1996, the family moved to Andover, Minnesota; and he served at Epiphany Church until his birth into eternal life in 2000. He had that "presence" about him when he was serving that can’t be taught. One could see that he truly believed that Jesus was present.

Charles began praying the Liturgy of the Hours regularly when he was eleven. At the same time, he started serving as a Youth 2000 New England volunteer. He designed the web page, maintained the mailing list, and designed flyers and nametags. During the retreats he was an altar server and sacristan, and the general gopher for whatever was needed. For Youth 2000 Minnesota, he maintained the mailing list, designed the nametags, served at the altar, and was available to help behind the scenes whenever needed.
Charles had a great devotion to Mary. He designed and made his own brown scapular on his Mom’s embroidery machine. On one side was "My Lady" and the other side was "Mary" with twelve stars around it. In 1999, he also made a Mother’s Day card for Mary (this was discovered after his death).
On his "Ambition and Life Purpose" sheet for attaining the rank of Eagle Scout, Charles Anthony Francis Untz wrote, "My life purpose is to do the will of God. My ambition in life is to become a saint. There is nothing harder to achieve than this, but I will continue to strive for it. " - Source 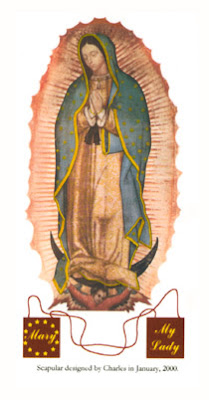 Source
Pray for us Charles, that we may be made worthy of the promises of Christ.