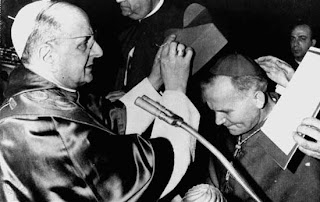 As I always say, contraception is the original sin of the sexual revolution...
.
From A Baptist:
.
I’m quite negatively inclined toward the pill. I think that it’s something that more and more people are rejecting – the whole idea of using chemicals to fool the body into thinking that it’s pregnant, for a long period of time, seems to entail health risks that are significant. As well, there is the overall cultural effect of the pill over the last 40 years, leading to such things as widespread promiscuity, the degeneration of the family, the objectification of women, sexual irresponsibility, breakdown of family, high rates of divorce, etcetera; clearly there are big moral issues tied up in the whole question. And these moral issues I think are tied up with all forms of contraception.
.
The idea of contraception itself is becoming morally questionable to people I think through the consequences of the ‘sexual revolution,’ or what we could even call the ‘contraceptive revolution’ – the whole idea that sex is recreational, that it’s not about children and family and marriage. The consequences of that, as they are worked out in society, with the predictions of Pope Paul VI coming true – these are causing people to look at it again and re-think what they took for granted, and I would count myself among those who are doing so. I am in the process of re-thinking contraception from a natural law perspective, and I would be at the point now of thinking that it really is inconsistent to embrace contraception, and then to not embrace the rest of the sexual revolution.
.
The relation to same-sex marriage.
.
I think the one thing that has happened in the last couple of years that has really forced people to think about this issue is the legalization of so-called same-sex ‘marriage’ in Canada. The idea of same-sex ‘marriage’ seems to entail a legitimation of homosexual behaviour, and when homosexual behaviour is legitimized, it is described as being morally equivalent to heterosexual sexual behaviour that is contraceptive in nature. This presents a real problem, because in order for Christians to say homosexuality is wrong, it seems inconsistent to say contraceptive heterosexual behaviour is right. And so if you’re relying on a strictly Biblical law perspective – simply the fact that homosexual behaviour is considered to be wrong in the Bible – if that’s your only basis, then the problem that is you may very well be able to say, “Well we Christians in the Church ought not to engage in that,” but for those who don’t accept the Bible, for those who are non-Christians, there doesn’t seem any way to justifiably require them to accept the anti-homosexual perspective.
.
And so without a natural law approach to it, it seems as though Christian support for traditional marriage collapses. And this is what we are seeing in our society. So I’m in the process of re-thinking the basis of Christian opposition to homosexuality, and asking the question of whether, in fact, it is justifiable to expect a society that is pluralistic, that is made up of Christians and non-Christians, to accept anti-homosexuality. While in asking that question one is driven to a natural law analysis of the morality of sex, which raises the question of contraception.
.
Theology of the Body
.
I have developed a great appreciation for the Theology of the Body, and it’s very possible to read the Theology of the Body as a massive explanation for why Humanae Vitae (Pope Paul VI’s encyclical) is correct from a Biblical theology perspective. The Catholic Church has always based its opposition to contraception, clearly and openly, on a natural law analysis.
.
As the sexual revolution took off in the ‘60s, ‘70s and ‘80s, the western Church was divided between Protestant and Catholic thought; the Protestants had a Biblical theology/divine command approach to ethics, while the Catholic Church emphasized the natural law reasoning against contraception. Now, after Protestant opposition to contraception collapsed during the 20th century, I see the churches as having been put in a weakened position, because on the one hand we had Protestants with a Biblical emphasis on sexual morality and family issues, but then you had the natural law analysis of the Catholics. But the Catholic position didn’t seem compelling to Protestantism, hence the collapse of their opposition to contraception, and not sharing the Catholic natural position, Protestants were not able to speak strongly into the culture about the morality of sexuality. - A Baptist's opposition to contraception.
.
H/T to Paula for the story.
Posted by Terry Nelson at 9:24 AM