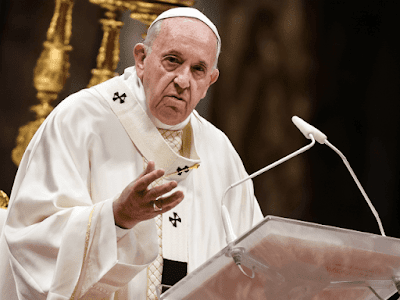 "They" are taking him down for this.  No surprise.

I'm not at all sure what the Holy Father said is so crazy.  Obviously he's speaking metaphorically when he says 'nature is unforgiving' - Fr. Z spends a little time spinning that.  How often has an artisan or cook said some thing, some medium is unforgiving?  How many times has a rock climber said a mountain is unforgiving if an athlete makes a mistake?  Yet when the Pope says something like that in a skype interview ...  I know.

Ten days ago I posted some thoughts related to Fr. Z's musings on a biological solution to take care of all the problems in the liturgy (here) - something Republicans seem to be musing on to help the economy get back on its feet BTW (here).  I also speculated on religious figures pointing to the COVID-19 pandemic as God's chastisement.  At the time I was reflecting on something an Italian Cardinal said about the virus, that it 'could' be seen as a chastisement - but not from God - he wasn't specifying particular evils or groups of 'evil-doers' (here).

"Rabbi, who sinned, this man or his parents?"

This past week, Cardinal Burke got a little more specific - some of his followers interpreted what he had to say, indicating the virus and incredible amount of deaths in Bergamo may have been punishment for the idolatry of Pachamama - and especially the prayer composed by the Archdiocese of the area, in honor of Pachamama. (here)  Likewise, the usual suspects have been held responsible for the chastisement.

It all sounds/reads crazy to those who are facing the unknown, as the virus spreads.  People can't be blamed for think what the Pope had to say, sounded strange - especially as it get's repeated on social media.  That said, a friend made a comment on the post I refer to, speculating on the notion of chastisement.  Perhaps anticipating the Pope, but more because she has read Laudato si, my friend had another view of the chastisement theory.  She wrote:

"This pandemic is the result of our destruction of the earth. All Coronavirus, e.g. SARS, comes from animals. Covid-19 originated from a live animal market in Wuhan. We are destroying the habitats of animals, displacing them and coming into contact with them in ways we never did before. Pope Francis has said it is sinful to destroy the earth. We are reaping the results of our sins, but it is not from God. We caused it ourselves." - Catholic in Brooklyn

"If we thought of this situation as a punishment from God, we would betray the very essence of the gospel." - Cardinal Gualtiero Bassetti


I have to agree, which may account for my sense of understanding for what the Pope said metaphorically about 'nature taking her revenge on humanity.'  Personally, I do not see this as a particular chastisement, or divine punishment for the usual suspects, but rather a natural development, or effect. Catholics know there are natural consequences to sin.  Therefore, there are natural consequences for what human beings do to nature.  Habitat destruction, pollution, and other abuses against nature result in natural consequences.  I am surprised religious people consider such a notion to be steeped in idolatry or nature worship.  Our Lord himself told the Pharisees, who asked him to rebuke his disciples, “I tell you, if they keep silent, the stones will cry out!”  The Pharisees of today react in the same way to Pope francis, as they look for ways to 'catch' him in some error.

On the other hand, those who look to empty locutions or mundane messages from soap-opera style apparitions, might do well to keep in mind what Sr. Lucia, who saw Our Lady at Fatima, said about chastisement.  She pointed out that it is not God who is causing it, rather it is we ourselves doing it:

And let us not say that it is God who is punishing us in this way; on the contrary it is people themselves who are preparing their own punishment. In his kindness God warns us and calls us to the right path, while respecting the freedom he has given us; hence people are responsible”. - Message of Fatima


If it should happen one day - and it could be today - that I become a victim of ... - Bl. Christian de Chergé


Tomorrow there is a hidden feast day, under Our Lady of the Annunciation's mantle, if you will.  It is the feast of St. Dismas crucified, the penitent who didn't judge, didn't condemn and did not claim anything from Christ crucified except to implore him to have mercy upon him - that he remember him.  Dismas, in his agony, looked at the other thief, who insulted Christ and made demands upon him.  What did Dismas say, to make him understand what was happening?


Do you not fear God, since you are under the same sentence of condemnation? And we indeed justly; for we are receiving the due reward of our deeds; but this man has done nothing wrong. - Luke 23

I see all of us - no matter who or what we are - pretty much in the same situation.  Rather than pointing fingers at one another, or deriding one another because we disagree, let's remember the sentiment St. Dismas expressed to the complaining thief:


We are all under the same sentence ...

COVID-19 is a global pandemic.  We are all under the same sentence.