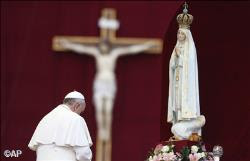 From an expert on Fatima.

Kevin Symonds is a man I believe is a reliable expert on Fatima and the writings of Sr. Lucia - I would call him a Fatima scholar.  I don't know him personally but I have read his work and what he writes on his blog.

Symonds responded politely to Fr. Z's post on the vision of the Third Secret, wherein he speculates that it may have foretold two popes in the scenario.  Kevin offered to explain another dimension of the vision which would better accord with the theological exegesis offered by Cardinal Ratzinger.  (More or less.)  He politely asked him to 'refer to the book he had written on the Secret.  Fr. Z seemed to rebuff the idea, and stuck to his theory.

Actually, posting a separate reply on his blog is a good idea, because if he tried to comment a second time on Fr. Z's site, he might find himself blocked.  That said - I'll post an excerpt from Kevins post.

Under my comment, Fr. Z. responded in his characteristic red comments in brackets:

[Refer me? Send me the book. And the fact remains: that’s how she described it. Facts are stubborn.]

In his post, Fr. Z. associates the text “‘something similar to how people appear in a mirror…” with the text after it (the Bishop dressed in white). Thus, Fr. Z. wonders if the phrase is about two popes as in a mirror image.

So, is his interpretation correct? I have some thoughts on this question and submit them to the reader for consideration.

(As Cardinal Ratzinger noted) "In the “mirror” of this vision we see passing before us the witnesses of the faith decade by decade."

It is, therefore, clear that the Church herself understands the “mirror” and “light” analogy to be referring to God. It is not a literal mirror that the Pope passed by and saw a reflection.

Conclusion:
Sr. Lúcia lacked theological, spelling and grammatical finesse in her writings, as is generally acknowledged.[4] She was, however, gifted with prophecy and wisdom in her simplicity. As I have said elsewhere, you have to pay attention to mystics as they are subtle people; one can miss something very important if care is not taken. In the present case, it seems plausible that Sr. Lúcia employed the “mirror” analogy in order to explain the manner in which the three visionaries saw the vision that is the third part of the secret of Fátima.  - A Reply to Fr. Z

In his footnotes, Kevin mentioned his appreciation for Fr. Sotello's comment on the more accepted theory of what Sr. Lucia meant in describing the vision as 'seeing people  passing by as in a mirror'.  I was happy with his comment as well, however I believe he misquotes something Our Lady said:  "Rather, she reinforces the phrase made earlier by Our Lady at Fatima, that “the Holy Father will have much to suffer for.”"  I've never read it in that way.  I've always understood Our Lady's words to be, "the Holy Father will have much to suffer", not "suffer for".  To 'suffer for' makes it sound like the Holy Father is being punished.  That was never the sense I had from Our Lady's words.

Email ThisBlogThis!Share to TwitterShare to FacebookShare to Pinterest
Labels: Fatima scholars, The light that is God